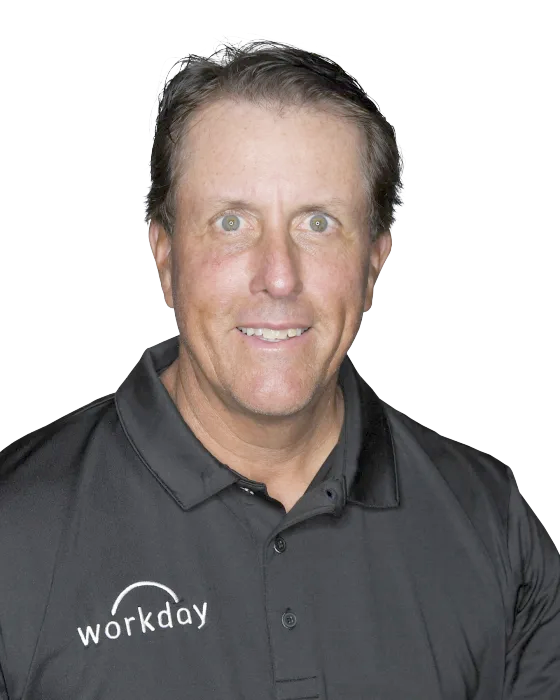 Phil Mickelson needs no introduction, even if you are a sports fan but don’t follow golf closely it is more than likely you are still aware of his pedigree. Now 50, he is still managing to compete at the highest level on tour, most recently winning at Pebble Beach in 2019 for what was his 44th PGA Tour win. His form is erratic but he is still able to contend on courses which suit, as demonstrated by the three top 3 finishes he posted in 2020.

Known for his left-handed swing and sublime short game, Phil has always been a fans favourite and for years was Tiger’s closest rival. Nowadays, he is a social media hero, where he takes to Instagram and Twitter to talk about ‘hitting bombs’, calf workouts and #PhiresideWithPhil. Critics say this has been a distraction from his golf but it is certainly entertaining. Phil takes his fitness very seriously though and it is probably the main reason he is still competitive, along with increased club speed which allows him to match the big hitters.

Phil’s favourite courses are Augusta and Pebble Beach and usually plays his best golf at the start of the year on the West Coast Swing. It appears there is still life in the old dog yet so keep Phil onside if he is in the mood.

Phil turned 50 in June 2020 and began playing with the seniors.  It won't stop him "hitting bombs!"

May 2021
Phil converted a one stroke lead at the PGA Championship to win his 6th Major.  Although shaky for the first six holes (+1 through 6), he would play the remaining holes in level par and see off his competitors.

February 2020
Phil had a chance to win the Pebble Beach Pro-Am entering the final round 1 shot behind Nick Taylor, however shot a 74 to finish 3rd, 5 shots behind winner Taylor. This performance could be attributed to contention rust however and in general Phil can be backed with confidence going forward.

February 2019
For his most recent win at Pebble Beach, he was absolutely flawless on the final round 65 to take the title by 3 shots. He entered that final round trailing Paul Casey by 3 shots and the standard of his golf was of such calibre that it forced Casey into making mistakes too.

March 2018
A year before that at the WGC-Mexico Championship, he sat 2 shots behind Shubhankar Sharma after 54 holes, before shooting a 66 to reach a playoff with Justin Thomas. It was his first win in 96 starts so a remarkable performance.

Summary
You don’t get 45 PGA Tour wins including six majors without having a tremendous amount of bottle and there is no doubting Phil can be backed with confidence in the mix. Phil's Golf Betting Club Pressure Performance Rating is set to 4 stars.

West Coast Swing
Phil's performances at the end of January and whole of February during the West Coast Swing are notable. Year on year he racks up top 5 finishes at the Farmers Insurance Open, Waste Management Phoenix Open, Pebble Beach Pro-Am, and Genesis Open.

Unpredictable
Phil has always been dangerous for weeks at a time when he’s in form, but recent results point to him being able to post a big finish on the back of a missed cut the week beforehand - 3rd at the 2020 Saudi International and win at 2019 Pebble Beach both followed an MC.

Major's
​Phil is a five-time major champion with three at the Masters (2004, 2006 and 2010), one at the PGA Championship (2005) and one at the Open Championship (2013). The only one he is missing is the US Open and he has had 6 (yes six!) runner up finishes in that event. If he doesn’t go on to achieve the career grand slam, he can consider himself extremely unlucky not to do so.  That said, the US Open returns to Winged Foot in 2020, having hosted in 2006 where Phil recorded one of his runner up finishes and blew a fantastic chance to win.  Needing only a par at the last to win, he ended up making double bogey to miss out by 1.

However, between 2017-2019 Phil did not have a Top-10 at any major and 55th was his best finish in 2020. It is fair to say that his driving stats would have contributed to this significantly, to put it simply if you are missing fairways at majors you will usually be penalised.

Phil’s erratic form has shown he still has the ability to contend if everything is clicking that week and his short game and variety of shots available will always be a advantage over the majority of the field so we wouldn’t put you off backing Phil for another major if he is driving the ball well in the lead up.

WGC's
He also has three WGC’s to his name, two in 2009 – WGC-CA Championship and WGC-HSBC Champions – and one in 2018 at the WGC-Mexico Championship. Best result of 2020 was 2nd at St Jude Invitational so on his week he can still contend.

Phil has a PGA Tour Playoff record of 8 win, 4 Losses.  As mentioned above, he defeated Justin Thomas at his last playoff in 2018 WGC Mexico. He had lost his three previous playoffs to that between 2007-2012 and won his previous four to that between 2001-2005. If that trend continues, expect Phil to win his next PGA tour playoff!

Phil’s last European Tour playoff came in 2013 when he defeated Brandon Grace to win the 2013 Scottish Open. Prior to that in 2007, he had won one and lost one that year.

Arnold Palmer Invitational, 2020
“I'm a little frustrated that I haven't gotten off to the start this year I would like, but it doesn't feel like -- I'm not discouraged. I don't feel like I'm that far off”

“I'm not real excited about the tournaments that are the week before. They don't really help you in the Majors”

Pebble Beach Pro-Am, 2020
“And these last couple of weeks have really given me a lot of motivation and momentum to continue doing what I've been doing. It's disappointing certainly to have not won, but I got outplayed.”

“I've always struggled with right-to-left wind and I feel like I had a little bit of a milestone here these last few weeks where, off of 18, wind's blowing right into the ocean, in the past I've struggled with that. I hit two great little low drives in play. If I can continue to do that it's going to be a good year. I just worked hard on it. I worked hard on it with the equipment, with my swing, to get rid of that left miss and I'm excited about where we're headed.”

Q. What's been the biggest challenge in the last 52 weeks since you won here?
“Getting my confidence back and playing well and starting and visualizing and seeing what I want to have happen, not letting negative thoughts continue to creep in after so many months of poor play. But these last two weeks have been good strides. I got off to a rough start, knowing I'm playing well, but not focusing properly the first two weeks, missed the cut and now I've had two third place finishes and I'm going to continue to build on that and give myself more chances.”

Masters, 2019
“It just didn't quite all come together this week, but gosh it was a fun week and it is my favourite week of the year and I just, I love being here.  I mean iron play is always important there but it's important anywhere, but I think the two areas that you have to be at your best to play well at Augusta is you got to hit the ball long and have a really good short game.”

Pebble Beach Pro-Am, 2019
Q. You have won multiple times at various courses, would you say Pebble Beach is the course that fits your game perhaps better than any other?
“I would have a hard time arguing another course does. Maybe Augusta. But the thing about Pebble Beach is that when it rains and when it's wet and that spongy poa annua you have to put the pins on a higher spot because water will collect and so those high spots are sometimes tough to get close with your iron shots. My ability to hit some of these little low, no spinning shots and those are hard shots that a lot of guys don't practice and I've become very proficient at that and it's become a strength of my game and that's why I'm able to get to some of these pins and it gives me a good advantage over the course of a week.”