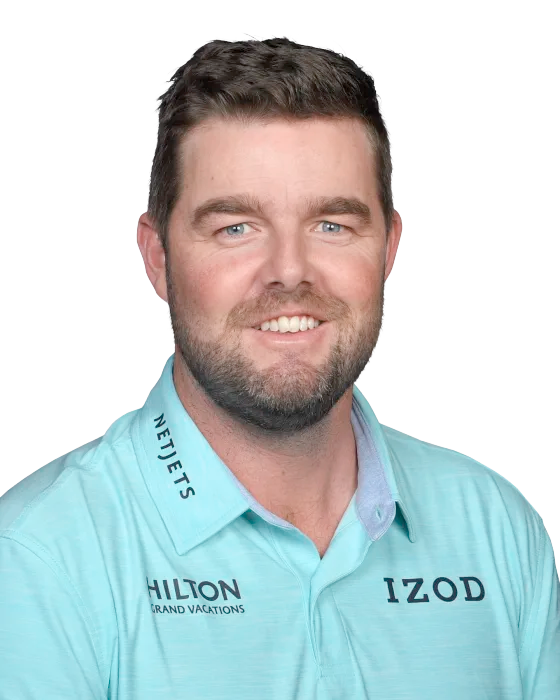 Marc Leishman is an Australian five-time PGA Tour winner with four of his wins coming since 2017. He has some prestigious titles to his name; Farmers Insurance Open (2020), CIMB Classic (2018) BMW Championship (2017), Arnold Palmer Invitational (2017) and Travelers Championship (2012). He also won the 2015 Nedbank Challenge in South Africa. He finished 24th in the 2019 FedEx Cup, his 3rd consecutive season in making the season ending Tour Championship. Best ever FedEx Cup finish was 6th in 2017, the same year he reached his highest ever world ranking of 12th.

Marc turned professional in 2005 after a successful amateur career in Australia. In 2007 he made his way to the Korn Ferry Tour, winning his maiden title at the WNB Golf Classic in 2008. He earned his first PGA Tour card in 2009 and took advantage, winning rookie of the year. He has been a PGA Tour member since and is now a force in WGC’s and majors. Almost won the 2015 Open Championship, losing out in a playoff to Zach Johnson.

Marc struggled badly following the resumption of golf after the lockdown for Covid-19, failing to post a single top 10.  He is on record as saying the lack of crowds affected him.  He's spoken of the steps he's taken to adjust his form and mental approach and we should see Marc back to his old self in 2021.

On 31 March 2015, Marc’s wife Audrey admitted herself to hospital suffering from acute respiratory distress syndrome. Leishman returned from preparations for the 2015 Masters Tournament to be with her. She was put in an induced coma, and toxic shock began to affect her organs. She was given a 5% chance of recovery. In mid-April, she had recovered enough to return home, and Leishman resumed the Tour in New Orleans. Note that Marc played his best ever golf in 2017, maybe after having some perspective after this event.

March 2020
Entered the final round 2 shots behind Tyrell Hatton at the Arnold Palmer Invitational and shot 73 to finish in 2nd place, 1 shot behind Hatton who shot 74.

January 2020
Shot a final-round 65 to win the Farmers Insurance Open by 1 stroke over Jon Rahm. Marked his third career final-round comeback of three strokes or more.

July 2019
Began the final round 3 shots behind Rory Mcllroy at the WGC- FedEx St Jude Classic. Shot 67 to finish in 3rd place 4 shots behind Brooks Kopeka who shot 65.

December 2018
Began final round 3 shots behind Cameron Smith at the Australian PGA and shot 69 to finish in 2nd place, 2 shots behind Smith who shot 70.

October 2018
Recorded a final-round 7-under 65 at the CIMB Classic for a 5 shot victory, his fourth win on the PGA TOUR. Grabbed a share of the 54-hole lead with Shubhankar Sharma and Gary Woodland after playing the first three rounds in 19-under.

May 2018
Held the solo-lead after the first and second rounds (61-66) at the Byron Nelson, entered the final round tied with Aaron Wise. Shot 68 in final round but was pipped by Wise shot 65 to win by 3 shots.

Summary
With 4 wins since the start of 2017, Marc has become a prolific winner on the PGA Tour. Final round performances at Farmers Insurance and CIMB Classic were flawless and he can be supported with confidence in the mix. GBC Pressure Performance Rating of 5 stars.

Unpredictable
Also capable of big results after a poor previous week. In 2019, 3rd at Safeway Open followed a WD, 3rd at WGC- St Jude Invitational, 5th at Memorial, 9th at WGC -Matchplay all followed a MC. Don’t be put off by poor form.

However, it is the Open Championship which Marc’s best performances have been with finishes of 5th in 2014, 2nd in 2015 and 6th in 2017. The 2nd place finish in 2015 was a result of a playoff defeat – see playoff record section for more details. He is a competent wind player and enjoys fast and firm courses that remind him of back home in Australia. Marc’s best chances of a major in future may be at an Open Championship.

WGC's
Best WGC finishes have come at the 2019 WGC – FedEx St Jude Invitational and 2014 WGC – Bridgestone Invitational. Also has a 9th and 11th place finish at WGC – HSBC Champions. Marc can be backed here or St Jude in future WGC’s.

Never got past the last 16 of the Matchplay.

Shot a final-round 70 to force a playoff with Justin Thomas at THE CJ CUP @ NINE BRIDGES in 2018 and finished runner-up. After halving the first playoff hole, found the water approaching the green on the second and eventually lost to a birdie by Thomas.

In 2015, he entered the final round of The Open Championship trailing Jason Day, Paul Dunne and Louis Oosthuizen by three strokes but fought back with a final-round 6-under 66 to join the three-man playoff. Ended up three strokes shy of champion Zach Johnson in the four-hole aggregate playoff.

Sony Open, 2021
"Yeah, exactly. I'm feeling good over the ball. Sort of just got rid of all that bad stuff out of my head. Ready to think about the good stuff."

The Masters, 2020
"I'm excited about April. I know the course is going to be perfect again. Hopefully, it can be firm and really play difficult and show what this place can do to you if you're a little bit off."

Sentry Tournament of Champions, 2018
"Just basically every round of golf I played until I was 15 was in a really strong wind. So, yeah, I just didn't know any different and it actually took me some time when I got over here to find my feet when it wasn't windy. So I've been over here a long time now, but you never forget sort of how you learn to play golf and what you're up against. So I think that's a big thing for me in the wind, is growing up in it and being comfortable in it."