Who Had A Season To Forget?

2020 was a hard year for everyone but for some players it was a year to forget entirely.  Find out who struggled the most in our end of year review. 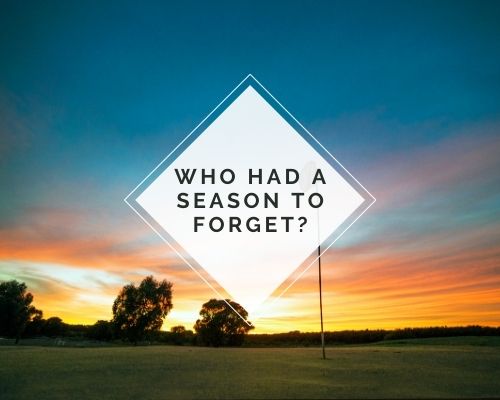 There's no doubt 2020 has been a strange year for us all and like the world in general, we've seen huge changes in the world of professional golf.  The hiatus undertaken by the European tour and PGA Tour in the Spring/early Summer was a significant departure from the world we know and it was unfortunate that The Open

The changes have affected the players in a number of different ways.  In addition to the usual loss of form and injuries, we've seen new factors at play which have contributed to players performing below their best.  Some players have stated they have struggled with the lack of fans and reduced atmosphere.  Players are on record as having struggled with the mental health aspects of competing within a bubble at Tour events.  Others have chosen to prioritise their safety or the welfare of their family and played a heavily reduced schedule.

The first year as a professional without a victory and a slide from world number 1 to number 12 is enough for Brooks to make our list.  It's perhaps a little unfair given the injury problems he's suffered in recent times.  However, he's a man who expects a lot from himself and is the first to state how competitive he is.  Five missed cuts was more than he missed in 2019 and 2018 combined, he'll be looking for a big 2021.

Justin is included given the inconsistency of his game throughout the year.  Nine missed cuts were more than he missed in the previous four years combined and it was his first winless year since 2009.  A top 10 at the US PGA and a couple of top 3 finishes were highlights but it wasn't enough to stop him dropping outside the top 30 in the world at the end of 2020.  It would be remiss of us not to credit Justin for his excellent contribution towards womens golf in the UK with the establishment of the Rose Ladies Series.

Rickie has slipped outside the world's top 10 for the first time since 2010.  Two top 10 finishes prior to the break for Coronavirus were he best he could muster amid swing changes.  There are also questions regarding the amount of time he gives up for sponsors and it may be that he needs to reassess his priorities.  Things may get worse before they get better as he now misses out on the benefits brought by ending the year inside the top 50 in the rankings.

Lucas continues to slide down the world rankings and appears to be very much a shadow of the player he was in 2017 and 2018 when he won twice on the European Tour.  Eighteen appearances and 15 missed cuts tells a story in itself and it may be that Lucas needs to give up his ambition of playing in the USA to find his game again in Europe.

Twenty One appearances and 12 missed cuts was a disappointing year for Andrew as he welcomed the arrival of his second child and would have hoped to benefit from the Nappy Factor.  Andrew was badly affected by the shutdown of golf courses in Washington during the pause for coronavirus and didn't play for seven weeks.  His family didn't travel with him to events when play resumed so his focus was perhaps not as good as it should have been.  We'll be interested to see how he fares going forward.

Andrea had a nightmare 2020, making 19 appearances and only playing the weekend on four occasions.  Given he was a player who had won on the European Tour in each of the past two years it was surprising to see him struggle the way he did. Andrea's driving was woeful in 2020, ranking last on the European Tour Strokes Gained: Off The Tee by some margin.  His putting was also alarmingly poor, ranking 153rd out of 159.  Perhaps the biggest worry for Andrea and his supporters will be the way he finished the year, placing last in each of the last five events he played.

It was a year to forget for Russell as he missed 57% of cuts (his worst ever year) and managed only a solitary top 10 finish at the Safeway Open.  His quest for extra distance affected his driving early in the year but it was largely his putting that was his downfall in 2020.  A five putt at the Players Championship before the event was cancelled was painful to watch and unfortunately was outside the top 150 for SG: Putting for 2020.  Encouragingly, his last four starts of 2020 yielded three top 25 finishes, hopefully we'll see Russell return to his best in 2021.

Danny Lee – Only a slight drop in the world rankings (90th to 135th) but only one top 10 finish all year (at the Arnold Palmer Invitational pre-lockdown) and there was THAT six putt at the US Open.

Francesco Molinari – It's difficult to be critical of Francesco this year given he's made the choice to concentrate on his family and moving to the USA.  We look forward to seeing him compete more in 2021.

Kiradech Aphibarnrat - Kiradech now plays the PGA Tour but 2020 was a bit of a struggle for him as he only made 14 starts and failed to record a single top 10 finish.  Eight missed cuts represented the worst season of his career to date and he'll be hoping to rectify that in 2021.

Jordan Spieth – It was another hugely disappointing year for Jordan, the first year of his pro career that he's not had a top 5 finish.  He needs to turn things around soon if he's to return to the top of the game.

Tiger Woods – Only played nine times with a solitary top 10, it wasn't a vintage year for Tiger.