Players with a significant birthday in 2023 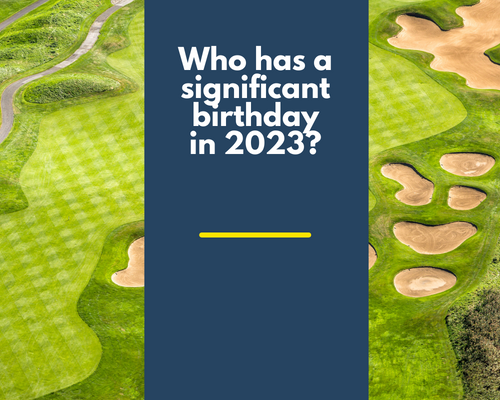 If you've read our Player Profiles you'll know we are firm believers in the positive effect a significant birthday can have on a player.  First discussed by Keith Elliott in his 'Elliott's Golf Form' books published in the late 1990s, there are numerous examples of a bounce in performance around the time of a significant birthday.

Who celebrates a significant birthday in 2023?

Jordan Spieth
It feels like he's been around forever but the Golden Child finally turns 30 this year.  A PGA Tour winner in each of the past two years, he'll be looking to add to his three Major victories in the coming year.

Justin Thomas
Spieth's close friend, Justin Thomas, also turns 30 this year. Thomas picked up the 2nd Major of his career last year and will look to build on that momentum.  JT turns 30 at the end of April, will he give himself an early birthday present of a green jacket?

Daniel Berger
Injury problems restricted Berger to only 12 starts in 2022 and it will be interesting to see how he performs when he returns to action.  A member of the victorious Ryder Cup team in 2021, he'll be desperate to make the team again.  Will turning 30 be the catalyst for a big year?

Xander Schauffele
It certainly feels like a number of the world's best are turning 30 this year and the self confessed old head is another who reaches the age of 30 in October 2023.  Could this be the year he makes his Major breakthrough?

Thomas Detry
Detry will play on the PGA Tour in 2023. Unable to win on the DP World Tour, will a move to America see him post a win? A second place finish in Bermuda at the end of 2022 will go a long way to him retaining his playing privileges and the pressure is somewhat off him already. Detry turns 30 in January.