The Story So Far (Updated) 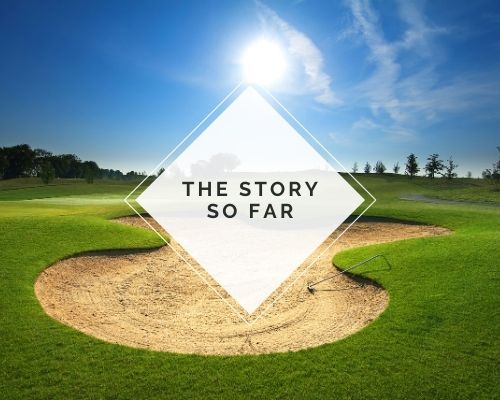 2020 began like any other for Duncan and I - both blissfully unaware of the impending doom that was Covid-19. By the first week of January, after several weeks of no competitive action, we are usually chomping at the bit for the Tournament of Champions to get underway in Hawaii. Little did we know at the time, a couple of weeks break was nothing really and our passion was about to be ripped away completely for a few months!

I think the majority of golf fans will remember the week of the Players Championship at Sawgrass for a long time - especially Hideki Matsuyama backers after he got off to a flier when tiyng the course record! Coronavirus was already ripping through the UK and America - as each sport fell victim one by one, golf appeared to be hanging on for dear life. Several American sports such as Basketball and American Football had succumbed, in addition to the English Premiership football, but there was blind hope that golf could continue due to it's socially distant possibilities.

The organisers announced on the Thursday that the final three rounds would be played without fans, which was met with disappointment but acceptance. Yes it would be strange, but if it meant play could continue then so be it. Then the fatal notification appeared - the Players Championship would not resume in the morning and the next three weeks of competition were cancelled.

Within hours of the disappointing news, I received a text message from Duncan which didn't need any further explanation - "It's now or never". With Coronavirus getting worse by the day, and the scale of the problem becoming more apparent, we knew that this was our chance to kickstart Golf Betting Club, as we would more than likely have a couple of months to build player profiles before tournament action returned.

It was an idea that would get floated about our WhatsApp group every so often, but both leading busy lives we would never get round to it. Both working with families, any spare time we had usually involved trading, watching or playing golf! Increasingly though, we grew sick of bookmakers restricting our accounts and it became too much of a hassle to get every bet on.

So what was the idea I hear you ask? As golf bettors, we regularly reminisced about Keith Elliot's books of the 1990's and 2000's where every year he profiled the top 200-250 players in the world to provide the punter an insight into the players strengths and weaknesses - and where they may be best suited to perform well. As we began golf betting in the early 2000's, it became a bible to us and we were both reaping the rewards financially.

From the age of 16 I remember I used to use Duncan's driver's licence to get my bets on at the high street bookies and subsequently used the same ID to get into the once famous Sports Bar in Sauchiehall Street, Glasgow, where I would watch the final round action. It must have been a strange sight watching a drunk child offer everyone in the bar a shot once Stephen Ames stretched his legs to a six shot victory at the 2006 Players Championship!

The truth was we were both hooked well before then though, as our golf journalist father used to take us to the Scottish Open and Alfred Dunhill Links every year. We felt so lucky to get inside the media tents and watch our hero's press conferences. We used to wait at the 18th hole and compete to see who could get the most professionals' golf ball's over the course of a day. As I was the younger and cuter sibling, Duncan never stood a chance of course.

Anyway, back to the idea! We recognised that no one in the current market was providing what Keith did all those years ago. From the day the golf schedule was interrupted we decided to dedicate our evenings and weekends to profiling players, and set 100 as our target for when play resumed - whenever that may be.

We discussed what we - as punters - would want to see in the profiles. We have always been in agreement that there is so much more to golf betting than just stats and agreed the personal touch to our player profiles would be what sets us apart from the competition. Trawling through old news articles and tournament reports to find snippets of information on each player would inevitably lead us to securing knowledge that would give us (and you) the edge over the bookmakers in future events.

It didn't take long for the theory to reap some rewards. Despite only having 100 profiles by the resumption in golf, of which only a handful were European Tour members, we landed Romain Langasque at 66/1 to win the ISPS Handa Wales Open in August. He was selected due to his 5 star GBC Wind Performance rating, with the players facing a blustery week at Celtic Manor.

That same month, we tasted our first major success which could also be attributed to the profiles. Our 'trends' section acknowledged that Collin Morikawa often produced his best results after a few weeks off, and he duly obliged, winning the PGA Championship at 35/1 pre-event and 66/1 in-play for us.

Of course not all of our wins in 2020 were down to player profiles, and our biggest winners we would probably attribute to the years of golf betting experience, which is so often invaluable. It's fair to say the we created some great traction on Twitter with some of our winners. We landed our biggest in-play winner in August - Jim Herman to win the Wyndham Championship at 300/1. September saw our biggest pre-event winner - 275/1 Martin Laird winning the Shriners Hospitals for Children Open.  We completed the hat-trick of three-figure winners in October when Brian Gay came in for us at 100/1 in Bermuda. It was a remarkable run and it was great to see our hard work being recognised as our following grew.

The one downside of the year was that we were unable to fulfil our initial plan to create revenue through advertising and donations, in order to keep our service completely free. The initial idea was that if we provide winners for free, people would in turn donate a small percentage of their winnings as a thank you. This did not materialise as we received just one donation all year!

We then received an exciting opportunity to partner with Nigel Seeley from Premier Sports Plays, who had been following our progress all year. Nigel was amazed at our results and was looking to enhance his golf service for 2021. After a couple of weeks of negotiations, we agreed to provide all pre-event tips exclusive to Premier Sports Plays. You can find the link to subscribe at the bottom of this blog.

The partnership is exciting for us as it has allowed us to fund this new website. Duncan and I will continue to build player profiles and update current ones. Each profile involves a lot of research and time, so we will continue to see slow growth but we will get there!

We've also been working hard to bring you some extra content (such as this) and we will be releasing various blogs over the coming weeks and months to keep you occupied.


Thanks for taking the time to read and we hope you enjoy the new website!

P.S. Don't forget, the only way to get our pre-event tips for the rest of the year is by signing up here:
www.premiersportsplays.com/category/16