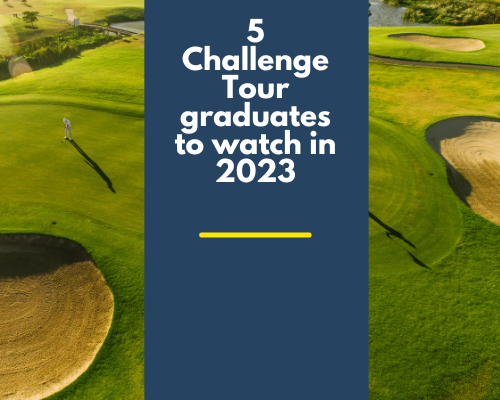 A new year brings a new crop of Challenge Tour graduates onto the DP World Tour.  We take a look at the five who we think can make an impact in the coming year.

Tom McKibbin
Tom finished 10th in the Challenge Tour rankings to earn himself a place of the DP World Tour in 2023.  Playing out of Holywood GC, the same club Rory McIlroy learnt the game, McKibbin has downplayed similarities to his compatriot.  He failed to win on the Challenge Tour, spurning good chances in Italy and South Africa, but he'll learn from those experiences.  It's anticipated he'll need to get himself into contention several times on the DP World Tour before making his breakthrough but he's capable of winning a lower grade DP World Tour event in 2023 or 2024.

Daniel Hillier
The young Kiwi has already been in contention for a DP World Tour title, having finished 3rd at the 2021 ISPS Handa World Invitational.  A fine amateur (he won the New Zealand Amateur Championship twice amongst other titles), he has won events on the Challenge Tour in each of the past two years.  Hillier will hope to emulate his compatriot Ryan Fox over the next few years and there is every reason to think he can notch a win in a weaker DP World Tour event this season.

Todd Clements
The 26 year old Englishman pipped Tom McKibbin to win the Irish Challenge in July.  That win set him up for a 16th place finish in the Challenge Tour's Road to Mallorca rankings.  He will now play on the DP World Tour for the first time and seek to continue his ascent up the world rankings.  A two time winner on the Euro Pro Tour in 2019, he's shown he has he killer instinct if the opportunity presents itself.  A few top 40 finishes in South Africa at the end of last year have given him a platform to build on for the coming year.

Jeong Weon Ko
At 24 years of age, Ko is starting to show his potential with a strong finish to 2022. Five wins in 2018 on the amateur circuit highlighted his potential and he then followed it with a strong season on the Alps Tour in 2020. It took him a while to get going on the Challenge Tour, a mediocre 2021 was followed by a poor first half of 2022. However, he put in a strong finish to 2022, only missing one cut in his last 13 events and posting six top 10 finishes. He impressed at the season ending Challenge Tour Grand Final when finishing 4th and backed that up with a 4th place finish in Mauritius.

Alejandro Del Rey
Finally, a player who, strictly speaking, didn't graduate from the Challenge Tour to the DP World Tour.  Del Rey finished 22nd on the Challenge Tour rankings this past year to just miss out but went to Qualifying School to earn a DP World Tour card.  The 24 year old Spaniard took 5th place at Qualifying School and will look to build on some promising starts to date on the DP World Tour.  He has a top 10 and several top 25 finishes on the main Tour on his CV already and given the fact he shot 58 in a Challenge Tour event in 2021, has to be kept in mind for low scoring events.