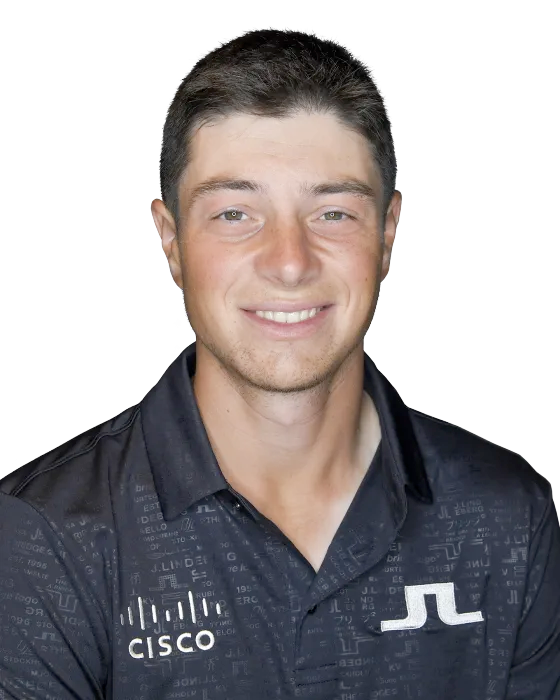 Viktor Hovland is a four-time PGA Tour Champion, two-time European Tour winner and 2018 US Amateur champion. Having turned pro after the US Open in 2019, Viktor won the 2020 Puerto Rico Open in what was only his 17th career start on tour at the age of 22. This made him the first Norwegian winner on the PGA Tour.

Golf was not big in Norway when Viktor started playing golf. His father, Harald, picked up golf while he was living and working in the United States (St. Louis) as an engineer. He brought golf clubs back to Norway and taught Viktor to play at age 11. Viktor spent most of the year practicing golf at an indoor driving range and by 2014 had won the 2014 Norwegian National Championships.

His US Amateur victory in 2018 gained him entry to several of the 2019 Majors. He was the low amateur at Augusta finishing 32nd and low amateur with a score of 280 at the US Open finishing 12th – the lowest 72-hole score by an amateur in the U.S. Open, breaking the previous record of 282, set by Jack Nicklaus in 1960.

After a blistering start on the PGA Tour, Hovland looks set to reach the very top of the game, and he appears to have the temperament to win multiple majors.

Viktor only turned pro in 2019

Summary
Viktor has been superb in contention for someone so young and can be supported when leading or in the mix. Be careful in major's however after his performance at the Open Championship. His Golf Betting Club pressure Performance Rating is set to ⭐⭐⭐⭐.

July 2022
❌ Viktor co-led the Open Championship with Rory McIlroy but could only manage a 74 to lose by SIX to Cameron Smith who shot 64. May have suffered from contention rust and new to condending in a major.
March 2022
➖ Began the Arnold Palmer Invitational 1 shot behind the leaders in difficult conditions and shot 74 to finish 1 shot behind winner Scottie Scheffler who shot 72.

January 2022
✅ Once again, came from 6 shots behind Justin Harding to win in a playoff against Richard Bland at the Dubai Desert Classic. Played his last three holes in 4 under par then birdied the 1st playoff hole to win.

January 2022
➖ Began the final round of the Abu Dhabi Championship three shots behind Jamieson. Shot 72 to finish two shots behind Thomas Pieters.

November 2021
✅ Came from 6 shots behind Morikawa to win the Hero Wolrd Challenge by a shot with a brilliant 66.

November 2021
✅ Led by 2 shots at Mayakoba and shot 67 to win by 4 shots, another classy performance.

July 2021
✅ Began the final round of the BMW International Open three shots ahead of Jorge Campillo and shot 70 to win by two shots.

January 2021
➖ Began the final round of the Farmers Insurance Open 3 shots behind Patrick Reed. Shot 71 to finish in 2nd, 5 shots behind Reed. An average effort.

December 2020
➖ One shot behind with 18 holes to play at the DP World Tour Championship, Viktor shot a three under par 69 to finish 3rd.

December 2020
✅ Viktor was two shots off the pace at the Mayakoba Golf Classic with one round to go. Shot 65 including a birdie at the last to win by a shot.

February 2020
✅ Viktor won the Puerto Rico Open by one shot after sharing the 36-hole lead and having a 1 shot 54-hole lead. Despite a triple bogey at the 11th, he shot 70 to beat Josh Teater by one shot, which included birdie at the par 5 last.

August 2019
➖ He took a 1 shot 54-hole lead at the Albertsons Boise Open on the Korn Ferry Tour, shooting a 68 in R4 to finish 2nd. He was beaten that day by Matthew NeSmith who shot a final round 64 to pip him by 1 shot, so all in all he was fairly unlucky to be beaten.

August 2019
✅ Earlier in the year, Viktor finished 4th at the Wyndham Championship with a final round of 65, coming up a couple of shots short.

Goes Best When Fresh
Viktor’s four wins on the PGA Tour to date, have come after a week or two off showing he is capable of playing well after a rest.

Events to back Hovland

Major's
He appears to have the assets required to contend at this year's Majors, in particular the Masters where it is hard to performed well on his debut. Expect Viktor to bag a major this season and anything over 25/1 seems more than fair given his improvement.

Workday Live Open, 2020
Q. Are you feeling more comfortable in these situations since you're putting yourself there a little bit more?
VIKTOR HOVLAND: I would say so, but it never becomes comfortable. You're always on your toes a little bit. You're always nervous, and you've always got to hit the shots that you need to hit, so it doesn't come to you naturally just because you've been there before. But it definitely helps.
Players Championship 2020
“It's nice to come back to a place like this where it's more traditional golf, if you could say, you know, a little softer fairway, less wind, you can attack more and you're going to get a little bit more out of your good shots.”

Puerto Rico Open, 2020
"I hit some really good shots down the stretch. The putt on the last was just a bonus."

“I've had some back-door kind of top-15 finishes, some top-10 finishes, but it's been very back-door, and last week I was kind of in contention, from not quite the get-go but had the co-leader from the second round and definitely felt the extra pressure of kind of being up there the whole way. It was a really long week, but to find of finish it off the way that I did felt really good.”

“I definitely felt it (extra pressure). It was kind of weird just having people expect so much from you when I haven't had quite the finishes that maybe warranted those expectations, but I kind of just stuck with within myself and tried to perform the golf that I know I'm capable of, and fortunately it came out, and I hope in the future that I keep -- that I can get that out more often”..