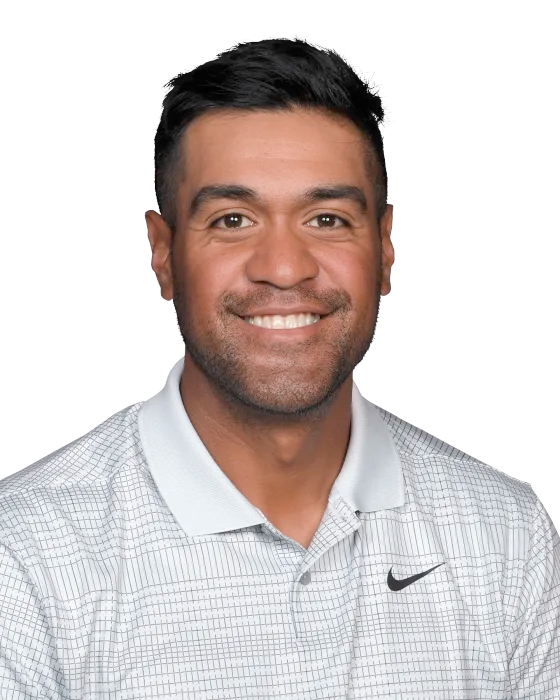 Tony Finau is probably the biggest underachiever in the game of golf today, having only won the Puerto Rico Open, a weaker field event. With seven runner up finishes and countless Top 10’s, he really should have converted a handful by now given his talent. He reached a career high of 8th in the world ranking in December 2018 in a season which he was 6th on the Fed Ex Cup standings.

He turned pro in 2007 as a 17-year-old despite having college scholarship offers in basketball. A few years playing mini-tours followed and it wasn't until 2014 when he earned his Korn Ferry Tour card. He took immediate advantage, winning the Stonebrae Classic en route to gaining his PGA Tour Card for 2015. Tony's progress continued the following year as he won his maiden title on the PGA Tour in Puerto Rico.

Tony is one of the biggest hitters on tour, so loves to eat up courses that favour the power hitters. He also has an extremely good record at the Majors. Keep an eye out for Tony on courses which demand a superb long game.

Tony finally recorded his 2nd PGA Tour win in August 2021.  We don't expect Tony to wait as long for his 3rd win.

Tony split with his long term caddie, Greg Bodine, after the 2020 Memorial tournament. The pair had been together since the 14/15 season.

Summary
Tony finally ended his drought in August 2021 after TEN 2nd place finishes since his previous win in 2016. Tony has turned into a clinical finisher in 2022 and his Golf Betting Club Presssure Performance Rating is set at ⭐⭐⭐⭐⭐.

July 2022
✅ Trailed Scott Piercy by 5 shots and shot 67 to win by 3 shots, a convincing win in the end with lots of help from Piercy and Grillo.

June 2022
✅ Co-led the Canadian Open and shot 64 to lose by 2 shots to Rory McIlroy. A solid performance despite not getting the job done.

August 2021
✅ Two shots back going into the final round at The Northern Trust, Tony shot a final round 65 to get into a playoff with Cam Smith.  A clutch putt on the 72nd hole and a ripped drive down the first playoff hole were impressive.

February 2021
✅ Tony started the final round of the Genesis Invitational four back of Sam Burns.  Shot an impressive 64 to force a playoff with Max Homa.  Bogeyed the second playoff hole to lose out.

February 2021
➖ Began the final round of the Saudi International 3 shots behind DJ. Shot 67 to finish 2 shots behind but that included bogeys at 16 and 17 once he had got himself a chance of winning.

January 2021
❌ Began the final round of the American Express joint leading with Si Woo Kim. Shot 68 to lose to Kim by 4 shots. Missed two putts of under 4ft and pulled an approach into the water on the back 9. A poor performance given the easy conditions.

February 2020
➖ Held a one-stroke 54-hole lead at the Waste Management Phoenix Open before shooting 70 and lost in a playoff to Webb Simpson. Traded at 1.05 on Betfair as Simpson birdied 17 and 18 to tie the lead. Whilst he missed a couple of makeable puts down the stretch and parred the driveable 17th, he didn’t throw it away and Simpson finished in style.

April 2019
➖ Began the final round of the Masters 2 shots behind Francesco Molinari thanks to a 3rd round 64. Shot 72 to finish in 5th place, 2 shots behind Tiger Woods who shot 70.

December 2018
➖ Began final round of the Hero World Challenge in a three-way tie for the lead with Henrik Stenson and Jon Rahm. Finished 2nd after a final round 69 to finish 4 shots shy of Jon Rahm who shot 65.

October 2018
➖ Held the solo 36- and 54-hole leads at the World Golf Championships-HSBC Champions before losing in a playoff to Xander Schauffele in Shanghai, China. Entered the final round at Sheshan International Golf Club with a three-stroke advantage and posted a 1-under 71 to force a playoff with Schauffele which went one extra hole.

June 2018
❌ Entering the final round of the U.S. Open tied for the lead and playing in the final pairing, posted a 72 to finish fifth, 4 shots back from Brooks Koepka. Began the third round 11 strokes behind then-leader Dustin Johnson and shot a third-round 4-under 66, one of just three sub-70 rounds on Saturday.

February 2018
➖ Held 18-hole co-lead at the Genesis Open before finishing in 2nd place. Entered the final round 2 shots behind Bubba Watson and both shot 69.

January 2018
❌ Entered the weekend tied for third at the Farmers Insurance Open, but a pair of 73s on the weekend resulted in the T6 finish.

Events to back Finau

The Masters
He was 10th in 2018 and 5th in 2019 at the Masters in his first two appearances, then 10th in 2021. The strengths of his powerful long game really suit the test and it's not unimaginable he'll don a Green Jacket in the future.

The Open
Never finished outside the Top 30 at the Open Championship in five starts, including 9th in 2018 and 3rd in 2019. Appears to have the links qualities to contend here again.

2-3. Tony won his most playoff, defeating Cameron Smith to win the 2021 Northern Trust.  Prior to that he lost to Max Homa at Genesis Invitational in Spring 2021. In 2020, lost to Webb Simpson who birdied the 1st extra hole at the 2020 Waste Management Phoenix Open. Two years before in 2018 he lost the playoff of the WGC- HSBC Champions to Xander Schauffele in the same circumstances.

Finau’s only other PGA Tour win was the result of a playoff victory over Steve Marino in 2016 to win the Puerto Rico Open.

US Open, 2020
Q. What are your expectations for the new PGA TOUR season?
TONY FINAU: Yeah, I mean, I have high hopes I feel like for this upcoming season. I'm playing some good golf and I have been playing some solid, consistent golf. I think I've learned a lot about myself through my first six seasons on TOUR. My favourite number is seven. I'm just starting my seventh season on TOUR. This is my first event. Maybe that's going to bring me some fortune during the season.