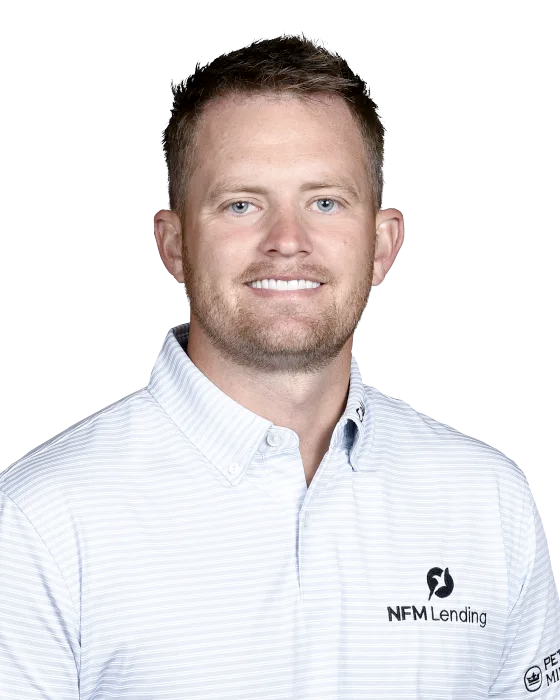 Tom Lewis is a two-time European Tour winner, both wins coming at the Portugal Masters in 2011 (his 3rd professional start) and 2018.

He first shot onto the scene as an amateur at the 2011 Open Championship after a first round 65 to give him a share of the lead. This was the lowest single round score by any amateur in Open Championship history and the equal lowest in any major championship. Incidentally, one of his first round playing partners was Tom Watson, who was his father’s hero and who Tom is named after.

Tom played on the European Tour from 2012 with limited success. He lost his card after the 2016 season but regained it after a good performance at Q-school.  Several quiet years followed before he returned to form in 2018, sparked by a Challenge Tour win at the Bridgestone Challenge. Further impressive finishes followed and he pole vaulted himself back into the worlds top 100 golfers.

Tom took another step forward in 2019 when he won the Korn Ferry Tour Championship, earning him his PGA Tour card for the 2019-20 season. Since then Lewis has played a mixed schedule between Europe and USA and recorded a 2nd place finish at a WGC in 2020.

March 2020
Shared an 18-hole lead at the Honda Classic but followed with 75, 71, 74 to finish 47th. Can be forgiven considering it was his first PGA Tour lead since gaining his card.

February 2020
At the Dubai Desert Classic he entered the final round 2 shots behind Ashun Wu, only to shoot 74 on a windy final round to finish 3rd – the eventual winner Lucas Herbert shooting 68 that day.

September 2019
Tom’s most recent win at the 2019 Korn Ferry Tour Championship was won convincingly by 5 shots after being joint leader after 36 holes and a 4 shot lead after 54 holes.

Avoid when rusty
The majority of Tom’s recent Top-10 finishes have come after playing the week beforehand (even if he did miss the cut), so he is best backed when he is tournament sharp.

Wind Expert
Lewis is a terrific wind player and tends to perform his best at courses where it blows. Portugal Masters is renowned for its wind, as is the Open Championship, Dunhill Links and several Desert swing courses where he has strong results. Look out for Lewis at any links style courses or middle east events.

Major's
As mentioned above, Lewis led his first every major start at the 2011 Open Championship after round one and went on to finish 30th as an amateur. He didn’t play the Open again until 2018 finishing 48th followed by his best ever finish in 2019 finishing 11th. A comfortable links/wind player, he can be backed in future Open Championships.

Lewis is yet to make a cut in any of the American majors, albeit he's only played a handful.

WGC's
Finished 2nd at the WGC FedEx St. Jude Invitational in 2020 when not in any great form. He could go well again in 2021.

Tom's only ever been in a playoff on the Australasian Tour in 2010 where he lost to Peter O’Malley in a three-man playoff at the New South Wales Open.

Honda Classic, 2020
Q. Great round of golf. The only player in the morning wave with no bogeys. You have to be very proud of that, considering the conditions.
“Yeah, you know, bogey-free for me is big. You know, it's always a good mental, like, strength. To be able to go out there on a course like that where the wind is blowing, as cold as it was this morning, as well, to not drop a shot was great.”

“I wish I was the type of guy that could roll out once a month and play really well, but I'm going to have to play three or four times before I start getting into the groove”

Q. You won the Korn Ferry TOUR Championship at Victoria National, which is a tough track. This is a tough track. Is there something about tough golf courses you like, maybe get you fired up?
“I think so. Normally if you look at stats, if there's a hole that's quite short or quite easy, I tend to drop shots on those ones. When things are challenging it's like, are you going to succeed or are you going to fail, and I think you've just got to get up there and make good swings and if it's your week, it's your week”

Dubai Desert Classic 2020
Q. You missed out of the cut last week, obviously finished the season at the end of the year so strongly. Were you just getting rid of some festive rust?
“Yeah, I'm not as good as Lee where he can just short of chill for six weeks and drink red wine and walk up and win.”

Open Championship, 2018
“Never been a great rain player even though I'm from England”