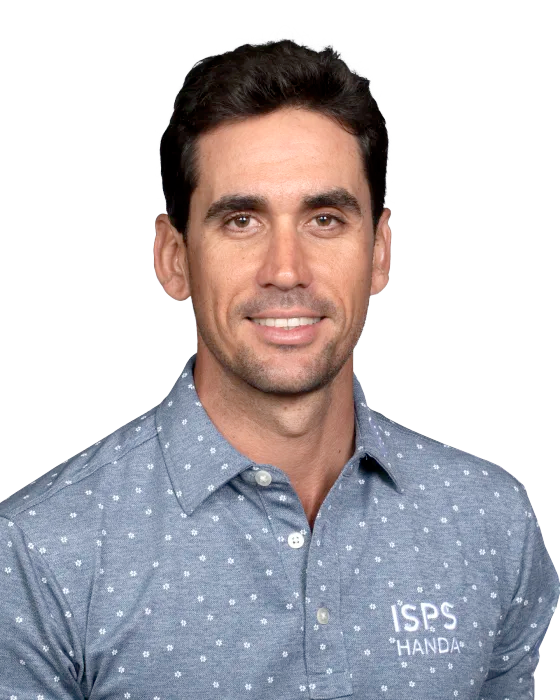 Rafa Cabrera Bello is a three-time winner on the European Tour having won the Austrian Open in 2009, Dubai Desert Classic in 2012 and Scottish Open in 2017. The win in Scotland was followed by his best ever major finish - 4th place at the Open Championship which catapulted him to his highest ever world ranking (16th). He also has two Challenge Tour wins, the first of which was one year after turning professional in 2005.

RCB plays a mixture of the European Tour and the PGA Tour nowadays but really struggled in 2020. He missed the cut 11 times in 2020, the highest number since 2010. He also failed to record a top 10, the first time that had happened since 2007.

He particularly enjoys playing out in the Middle East, in particular Dubai. A very capable wind player and plays well on links style courses. He'll be hoping to use these tournaments to get off to a better start in 2021.

Rafa and his wife welcomed a baby girl into the world in August 2019.

Rafa split from his long term caddie, Colin Byrne, after the 2020 Masters.

January 2021
Began the final round of the Abu Dhabi Championship 2 shots behind Rory McIlroy. Shot 69 to finish 6 shots behind Tyrrell Hatton who shot 66. An average performance.

January 2020
Trailed Francesco Laporta by 1 shot after 36 holes at the Abu Dhabi Championship and shot 71-70 over the weekend to finish 12th, 7 shots behind winner Lee Westwood

October 2019
Co-led with Adri Arnaus at the Open De Espana however Jon Rahm played the weekend in 7 shots better than Rafa to win by 5 shots.

September 2018
Finished 7th at the Dell Technologies Championship. Briefly took a share of the lead during the final round after seven birdies and a bogey on his first 11 holes, but dropped three shots over the last six holes to finish 5 shots behind Bryson Dechambeau.

July 2017
Won the Scottish Open after a final round 64 got him into a playoff with Callum Shinkwin. Began final round 4 shots behind.

Summary
Rafa has had several chances to win since his last victory in 2017 but hasn't quite done enough. Would currently advise laying him if trading short, especially in the early rounds. His Golf Betting Club Pressure Performance Rating is set at 2 stars.

Unpredictable
Many of his big recent performances have followed a poor previous result. In 2019, 2nd at the Open De Espana followed a 61st, 6th at BMW PGA Championship followed a 63rd, 3rd at the BMW International Open followed a 65th place finish. His victory in Scotland followed a missed cut in 2017 also. Rafa does not have to be in hot form to perform well.

Wind Expert
Rafa is a proven wind player, he grew up playing in a breeze in the Canary Islands so it doesn't faze him.

If he is to land a major it may well be the Open Championship as he is capable in the wind and on fast and firm courses as proved by his wins in Dubai and Scotland. In general though, his major record isn't great.

WGC's
Finished 3rd at the 2016 WGC-Matchplay and 3rd at the 2018 WGC-Mexico Championship. Also has a 5th place finish at the WGC-HSBC Champions in 2017. Many Top 20's in recent years, Rafa is much more likely to bag a WGC than a major however it is still a big ask.

2018 Qatar Masters
"I think I'm well known for a very consistent player, not having many clubs through the bag. On a day of a lot of wind, normally you need to use a lot of resources and I think I'm good at that. I'm used to playing with the wind, plus I like this course."

2019 Dubai Duty Free Irish Open
"I really like links golf. I enjoy playing it, even with bad weather, also. I do embrace the challenge."

2020 US Open
"It's (US Open) a tournament I do like. I tend to be a grinder, as well. I never give up. I keep fighting. I have played some great rounds in the U.S. Open, at Pebble Beach, at Shinnecock, as well."

2020 Abu Dhabi Championship
"I live in Dubai, so I don't feel alien at all. I've always said it, it reminds me a bit of the Canary Islands, playing in the sun and in the wind and seeing palm trees, that's how I grew up playing. So it brings back great memories. They are good courses, all of them, superb. It's always interesting conditions, and it's always nice to start the year here, start fresh, and try to play some good golf."