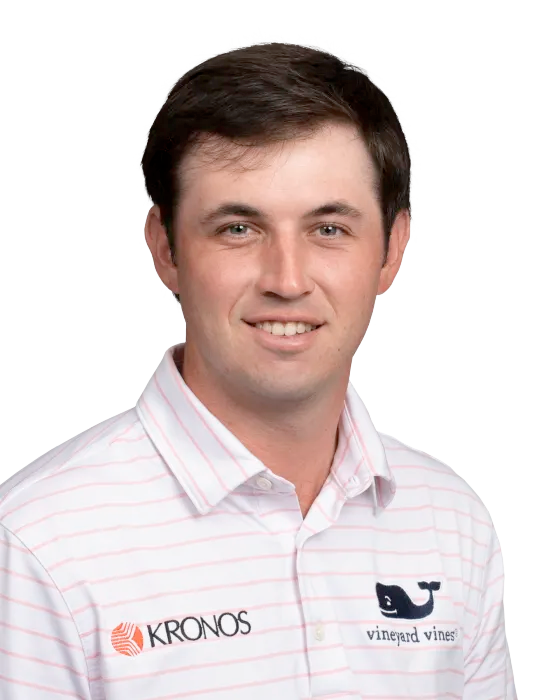 J.T. Poston won his sole PGA Tour title at the 2019 Wyndham Championship. He became the first player since 1974 to win a PGA Tour event without carding a single bogey.

He turned pro in 2015 and earned his first PGA Tour card in 2017 where he almost made a playoff in his rookie year, missing out by 1 shot at the Shriners Hospitals for Children Open. In 2018 his best finish was 5th at the Barbasol Championship before racking up a 7th at the 2019 Desert Classic and 6th at the RBC Heritage prior to his breakthrough at Wyndham.

J.T. is a fast-improving golfer and has a solid all-round game with no obvious weaknesses. There is no reason why he can’t go onto win again in the next few years.

October 2020
Began the final round of the Sanderson Farms Championship as joint leader with Sergio Garcia and Cameron Davis.  Shot a final round of 70 (his worst score of the week) to slip to 3rd.

August 2019
Won the 2019 Wyndham Championship by 1 shot after a sensational final round 62. He began the final round 3 shots back from Byeong Hun An. This equalled the lowest final round by a winner in event history.

June 2019
Rocket Mortgage Classic, played in the final group of the final round for the first time on the PGA TOUR, he shot 73 and finished T11.

Summary
Poston won impressively at the 2019 Wyndham Championship but he failed to grasp a good chance at the 2020 Sanderson Farms Championship.  He should however be ‘layed’ if leading after 18 holes as he has failed to convert 3 first round leads to date. His Golf Betting Club Pressure rating is set at 3 stars.

Favourite Tournament
Look out for JT at the RBC Heritage where he has posted consecutive top 10s in 2019 and 2020.

Major's
Poston played his first major in 2017, when he missed the cut at the US Open. The next major he played was the 2019 PGA Championship finishing 60th. In 2020 he played all three majors with two missed cuts and 75th at the PGA. He will more than likely need more major experience before he is to start contending.

WGC's
Played his first WGC in 2019, finishing 24th at the WGC-HSBC Champions. Backed it up with a 30th at St Jude in 2020 so may be a good player for side markets in future.

Only been in one playoff which was the Korn Ferry Tour in 2016, where he faced Wesley Bryan and Grayson Murray. He lost to Wesley Bryan on the second extra hole when he birdied, after all three making a birdie on the first extra hole.

The Honda Classic, 2020
Q. Where is your game right now heading into the new season?
JT POSTON: It's close. It's there. I feel like the short game is really sharp. My putting has been really good, pretty much like it was that week in Greensboro. Just trying to get the ball-striking a touch sharper. Tee balls have been fine, but the iron shots haven't been quite as solid as I'd like them to be. But I've been missing them in some good places, and short game has been sharp enough it's bailed me out. If I can figure out the irons a little bit more, give myself a few more looks, then I like where it could go.

Sanderson Farms Championship, 2019
Q. Feel comfortable out here on this course?
JT POSTON: Yeah, I do. I like the course a lot. I've played it every year when it was an opposite-field event. Happy that it's a full-field event now. Yeah, I love coming out here.

Players Championship, 2019
Q. Any specific goals for the weekend? What are you hoping for?
JT POSTON: Yeah, obviously win. Everybody's trying to win. I'm not scared to say that. It's easy to, I guess, get ahead of yourself a little bit and there's a lot of golf left and a lot of guys still got to play this afternoon, so we'll see where we end up. I'm just going to try to keep hitting it like I am and make a few more putts.