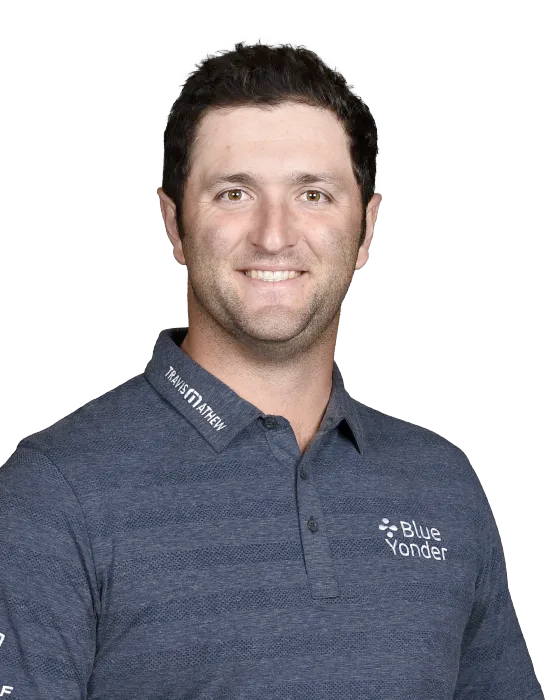 Jon Rahm (nicknamed ‘Rahmbo’) won the 2019 Race to Dubai after winning the season finale at the DP World Tour Championship in Dubai (an event he also won in 2017). This capped his 3rd win of the season – a feat he also matched in 2017 and 2018.

Jon turned professional in 2016 after winning the low amateur at the U.S. Open and finished 3rd in his first event as a pro at the Quicken Loans National. In 2017 he won European Tour Rookie of the Year which caused controversy amongst his fellow pro’s, who felt that it should've gone to a more committed member of the tour. Outside the majors and WGCs, Rahm had played just four regular season European Tour events. He has gone from strength to strength since then including a runners-up finish at the 2018 WGC – Matchplay to Dustin Johnson.

Jon’s early weakness on Tour was his fiery temper which could be triggered if things aren’t going his way but he's managing this better now and was ice cool to pick up his first major at the US Open in 2021.

Summary
Recent evidence suggests Jon is better coming from off the pace to win, he's been inconsistent when leading of late. Should be backed if trailing by a few shots as he likes being aggressive. His Golf Betting Club Pressure Performance Rating is set at ⭐⭐⭐.

June 2022
❌ Trailed by one going into the final round of the US Open and shot 74 to finish 7 shots short of winner Fitzpatrick.

April 2022
✅ Began the final round of the Mexico Open with a 2 shot lead. Shot 69 to win by 1 shot, wasn't the best performance by any means but enough to get the job done.

January 2022
➖ Began 1 shot back from the leaders at the Farmers Insurance Open and shot 71 to finish 1 shot back of List.

January 2022
➖ Co-led the Sentry Tournament of Champions, once again with Cameron Smith. Although shooting 66, Jon didn't bring his best golf and Smith beat him by a shot in the end.

August 2021
❌ Rahm jointly led with Cameron Smith going into the final round of The Northern Trust.  He would bogey two of his last four holes to slip to third and lose out by two shots.

July 2021
❌ Third going into the final round of the Scottish Open, shot 68 to slip to 7th.  Parred his last eight holes when two birdies would have got him into a playoff.

June 2021
✅ Began the final round of the US Open 3 shots behind the leaders. Shot 67 to win by 1 shot over Louis Oosthuizen. Birdied last two holes with clutch putts.

June 2021
✅ Rahm shot a superb Saturday 64 to hold a 6 shot lead going into the final round of The Memorial.  However, he tested positively for Covid-19 and withdrew from the tournament before the final round.

March 2021
❌ Rahm was 4 shots off the lead going into the final round of the Players Championship.  A disappointing final round of 73 saw him slip to 9th.

January 2021
❌ Began the final round of the Farmers Insurance Open 2 shots behind Patrick Reed. Shot 72 to finish 6 shots behind Reed. A poor effort.

October 2020
❌ Trailed Justin Thomas by one shot going into the final round of the Zozo Championship.  Was five under par through his first 11 holes to take the lead.  He was unfortunate to bogey the 12th when he had a difficult stance in a bunker.  However, a bogey on the par five 13th hole when he had an iron in his hand for his 2nd shot was unforgivable.  Lost out by a shot to Patrick Cantlay.

August 2020
✅ Jon entered the final round three shots off the pace at the BMW Championship.  Shot a sparkling 64 to make a playoff with Dustin Johnson before holing a 66ft birdie putt at the first playoff hole to win.  Notable that he incurred a one shot penalty in the third round for picking his ball up without marking it.

July 2020
✅ Took a 4 shot lead into the final round of the Memorial Tournament. Stretched the lead to 8 shots after 9 holes however wobbled a bit in difficult conditions in the back 9, playing it in +5 (including a two-shot penalty for grounding his club illegally). In the end he was always comfortably ahead and won by 3 shots.

January 2020
➖ Held a one-stroke lead after 54 holes of the Farmers Insurance Open before shooting 70 to finish in 2nd place, 1 shot behind Marc Leishman who shot 65. Fell to 0-for-2 in his PGA Tour career with the 54-hole lead/co-lead.

November 2019
✅ Co-led with Mike Lorenzo-Vera after 54 holes at the DP World Tour Championship in Dubai and shot 68 to win by 1 shot ahead of Tommy Fleetwood. This included a closing birdie on the 72nd hole.

September 2019
➖ Co-led with Danny Willet after 36 and 54 holes in what became a two-horse race at teh BMW PGA Championship. Shot 70 to finish 3 shots behind Willet who shot 67.

August 2019
➖ Began final round of The Northern Trust two shots behind Patrick Reed and both shot 69, finishing 3rd place.

July 2019
✅ Started the final round 5 shots back of 54-hole leader Robert Rock on route to a victory at the Irish Open. Closed with 62 to win by 2 shots over Andy Sullivan and Bernd Wiesberger who both shot 66.

Favourite Tournament
Jon has a tendency to win events multipletimes.  He's won each of the Irish Open, Open De Espana and DP World Tour Championship twice or more.  He would also have won The Memorial twice had he not withdrawn due to Covid in 2021.

Events to back Rahm

Masters
Jon has an excellent record at Augusta (5th, 7th, 9th, 4th the past four years) and can be expected to close in 2022.

Most recent playoff was at the 2020 BMW Championship where he defeated Dustin Johnson with a 66ft birdie putt.  Defeated Andrew Landry with a birdie on the 4th extra hole to win the Career Builder Challenge in 2018.

2021 US Open
"I feel like it (having COVID) relaxed me a little bit, and ever since the Sunday at the PGA, I felt a bit of a shift on the golf course mentally. I still had that grit, but almost like each miss bothered me less. I couldn't tell you why. I believe it's because I really set out myself to be an example for my son that he would be proud of, and I've done some stuff in the past on the golf course that I'm not proud of, and I wish I could eliminate it. But I've accepted it. I'm not saying it's going to be smooth sailing until the end, but I feel like that Sunday of the PGA changed things a little bit. My mental game was really good, and it was the same thing at Memorial. Mentally, I was really, really well, and that's what allowed me to play such good golf."