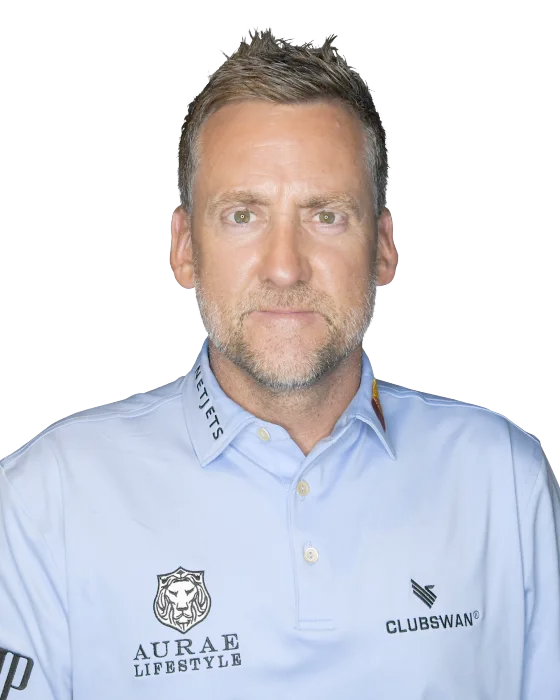 Ian was known early on in his career for his flamboyant dress sense and flair on the course.  Fortunately, he had substance as well as style and won his first European Tour tournament in 2000 after turning professional in 1996.  Perhaps best known for his heroics for Europe in the Ryder Cup, Ian is affectionately known as 'The Postman,' given his propensity to deliver points for the team.

Poulter is an excellent links golfer and was very close to winning the 2008 Open Championship, only to beaten by a superb Padraig Harrington. In his early 40’s now, Poulter doesn’t hit the ball as far as the young gun’s, however, he is a very consistent player who is capable of contending anywhere when he is playing his best golf.

In 2015, Poulter famously nearly lost his European Tour Card since he had only played in 12 events, one short of membership and Ryder Cup eligibility. He only earned entry to the Hong Kong Open after Rich Beem gave up his sponsor exemption to allow Poulter to compete. 2016 was another tough season for Poulter when he was sidelined with a foot injury for four months.

Poulters comeback from injury began in 2017 earning 2nd place at Players Championship and 3rd place at Canadian Open that year but it was 2018 where rubber stamped his return in two week with a 5th place at the WGC Matchplay followed by a win at the Houston Open.  Although he hasn't quite reached the heights of a career best world ranking of 5th, he remains a very competitive player.

Ian is extremely active on social media (accounts linked above).   He will often update during a tournament so pay attention to his accounts if thinking of having a bet on him.

October 2020
Two shots back going into the final round of the Scottish Open, Ian shot 70 to slip back to 6th place.  Bogeyed the first hole and was never really in contention thereafter.

June 2020
Began the final round 2 shots behind a four-way tie for the lead at the RBC Heritage. Shot 68 to finish 14th, 6 shots behind winner Webb Simpson.

April 2019
He began the final round of the RBC Heritage 1 stroke back of 54-hole leader Dustin Johnson but posted a 2-over 73 to finish in 10th place.

April 2018
Poulter’s victory at Houston was interesting for a couple of reasons. Firstly, he was 123rd after 18 holes – the lowest position of any 2019 winner after round 1. By 54 holes he had a share of the lead and managed to finish tied with Beau Hossler after sinking a 19 foot birdie putt on the last to match his 67.  Secondly, it was Poulter's first win in three attempts on the PGA TOUR when holding at least a share of the 54-hole lead, finishing T3 on both previous occasions.

March 2015
Honda Classic on the PGA Tour, Poulter had a three-shot lead going into the final round of the rain delayed event. However, he had a disastrous four-over-par final round of 74, where he found the water five times, included twice on the 14th hole which cost him a triple bogey. Poulter would finish in a tie for third, one shot outside of the playoff.

March 2016
Poulter held the 54-hole lead at the Puerto Rico Open, an alternate event on the PGA Tour. He led by one stroke entering the final round but shot an even-par round which included just the one birdie, to finish in a tie for third, one stroke outside of the playoff.

Summary
Having not been in the mix properly since middle of 2019, it is advised Ian is backed with caution for the time being.  His Golf Betting Club Pressure Performance Rating is set at 3 stars.

Likes a birdie fest
Only two of Poulters multiple victories have been won with a score worse than 15 under par, suggesting that he should be backed in low scoring events.

Stays Hot
In early 2019, Poults recorded four Top-6 finishes in a row showing he is capable of maintaining form.  Poults had a similar run in 2020 where he posted finishes of 6-5-12 on the European Tour.

Major's
Two top 25 finishes in 2020 at the PGA Championship and The Masters.

Poulter has never had a Top-10 finish at a US Open. In fact, it is the Masters which Poults has played the best in recent years, with three Top-10’s since 2010 and a 12th place finish in 2019. It would be a surprise if Poulter was to win another major now, but it wouldn’t be too much of a shock if had one or two more chances.

WGC's
Much preferred would be backing Poulter at WGC’s where he recorded four Top-10’s in six events between 2018 and 2019, in addition to his wins in 2010 and 2012. He is a particularly strong match play player with an excellent Ryder Cup record in addition to a Volvo World Matchplay title in 2010, so the WGC Matchplay event is always one to keep an eye on Poults.

Poulters sole non-WGC PGA Tour victory at the Houston Open in 2018 was won after defeating Beau Hossler in a two-man playoff. He won on the first extra hole with a par. That is his only playoff experience since joining the PGA Tour.

On the European Tour he has a playoff record of 1-1. In the first of them he beat Sergio Garcia in 2004 to win the Volvo Masters Andalucia, parring the last to win the first extra hole. On his second playoff he was defeated by Robert Karlsson at the Dubai Wold Championship in 2010, losing to a Karlsson birdie on the second extra hole.
On the whole, Poulter can be trusted in a Playoff, given his match play pedigree.

Scottish Open, 2019
“I enjoy links golf. I enjoy shot-making. I enjoy what links golf gives us. So yeah, I mean, let's get at it. Let's get after it.”

RBC Heritage, 2019
“I'm just going to go out and have fun, you know? I don't put any pressure on myself anymore. It's not about the win, it's about being in contention, which I've done that a lot this year. I feel great about my game and I'm just going to go have some fun.”

“Yeah, I've just got to keep doing what I'm doing. I'm in position again. I'm in contention, which is what I like to be on a Sunday. As often as I've done that this year, I haven't quite finished one off. It would be nice to go out tomorrow and be aggressive where I can, and obviously see if I can go close.”

Dubai Desert Classic, 2019
“When I look back at last year, when I look at the form I'm in, when I look and plan my schedule for this year, I feel good. I don't feel 43. It's nice -- I'm getting old but there's still a few miles left in these legs.”

RBC Heritage, 2018
“It's been a long six weeks. I don't normally play six in a row. But the way the schedule panned out, I pushed to get into Augusta, doing that just it was meant to be.”

“Obviously I don't have the distance off the tee what some of the other guys do. But if you pick and choose some of the right courses, this one, especially, distance really isn't that much of a factor this week.”

Players Championship, 2017
“I think I was really pleased the way I played all week, barring the nightmare second shot into the last. But I think when I sit back and reflect on this week, I've played with less pressure. I've played probably with a little smile on my face. I've had a lot of fun. But it's been a good week. I wish I hadn't have hit that shot on the last. I wish I'd have hit it up somewhere around the green and had a little chance to put a little bit of extra pressure on. But it was a good week.”