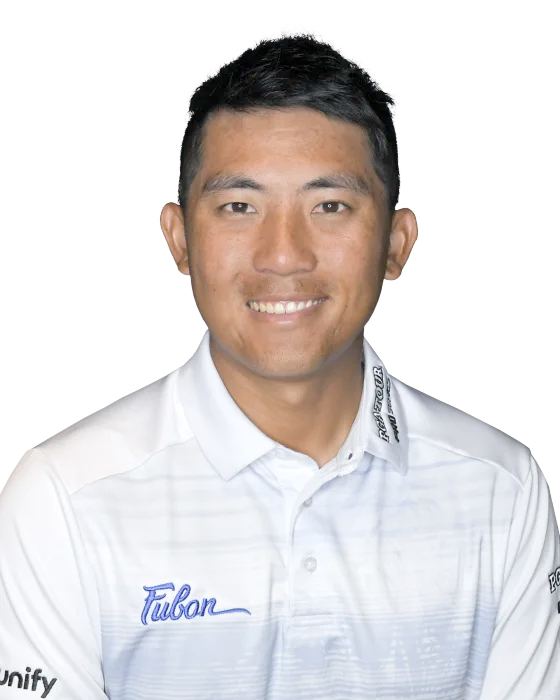 Cheng Tsung has one of the most interesting backstories of any golfer on tour at the moment.  Pushed by his father to become a professional golfer, C.T. and his brother would practice by hitting balls off the top of their roof into a rice field and practice on the beach.  Winning junior tournaments in Taiwan eventually led to a move to Florida aged 15 to further his progression.  This did result in him achieving World Amateur Number 1 ranking but also came at the cost of missing his father’s funeral as the family deemed it too risky he return to Taiwan in case he was called for Government military service.

C.T. turns 30 in November 2021.  We should lookout for him to win again in 2021 as this landmark birthday approaches.

May 2019
C.T. was 2 shots behind with 18 holes to go at the Charles Schwab Challenge and shot a very credible 69 but lost out to a dominant Kevin Na who shot 66.

August 2018
C.T. had a significant wobble when presented with a chance of winning on the PGA Tour for the first time in 2018 at the Wyndham Championship.  He traded as low as 1.47 on Betfair during the final round but after driving out of bounds on the 72nd hole and taking a double bogey he ultimately lost out to Brandt Snedeker by 3.  It should be noted that he also had his wife on the bag at Wyndham when he could have benefited from a professional caddie.

Summary
All three of Pan's wins to date have come from off the pace so he is better backed when coming from behind. That said, C.T. is on record as saying he used the memory of Wyndham to inspire him to victory at The Heritage and we can assume that he has now learnt from his mistake at Wyndham when in contention.  His Golf Betting Club Pressure Performance Rating is set at 3 stars pending further evidence that Wyndham was a blip.

Unpredictable
C.T. is a player who can suddenly find form after a missed cut in his previous outing, as evidenced by his T2 at the Farmers Insurance Open in 2017, his win at RBC Heritage in 2019 and T3 at the Charles Schwab Challenge in 2019. C.T. is an inconsistent golfer, missing the cut in roughly 1 in every 3 tournaments he plays in.  As such, C.T. is probably best backed after the first round of a tournament to see whether he’s got his eye in.

Avoid when rusty
C.T. is a player who struggles when he hasn't played for a few weeks.  In the last five years he has missed the cut four times when playing his first event of the year.

Major's
C.T. has played in 10 Majors as an amateur and professional and missed the cut 6 times.  In 2020, he produced his best ever major showing at The Masters, finishing 7th - it was also his only top 10 in 2020!

WGC's
The WGC HSBC Champions event in China may represent Pan's best opportunity in a WGC or Major.  In 2018 C.T. spoke in glowing terms about how Sheshan International G.C. suited his game.

C.T. won his first playoff in 2015 on the Canadian Tour but lost out in 2016 when involved in a playoff on the web.com Tour (now the Korn Ferry Tour).

2019 BMW Championship
Q. What are some of the key areas you think you stronger for the new season?
C.T. PAN: Putting, chipping around the green. I can still do better. I'm not bad. It's very fine detail. So something I can do better at for sure.

2019 Charles Schwab Challenge
Q. Couple weeks ago at RBC Heritage when you won you began the round two shots back. Going to be starting the day tomorrow couple shots back. How does that experience being in the hunt and winning, can you pull from that?
C.T. PAN: I mean, I'm sure the experience at RBC helped me to get here. I feel more comfortable on Sunday for sure. I know what I need to do in order to become the leader. I guess I'm just trying to get some good shots out there and hopefully I will hit some putts and that will be good enough.

Q. How would you compare Harbor Town and here?
C.T. PAN: To here? The courses? They are very similar. Obviously Harbor Town it was close to the ocean, especially last three holes. I mean, when we play there last three hole was blowing 30 miles. Before that was just blowing five to ten so you got to adjust to that quickly otherwise you will lose shots.

But here it's just blowing consistently 10 to 25. You just kind of need to adapt right away. A little bit different strategy I guess.

WGC HSBC Champions 2018
Q. Do you feel after spending the last two days here, working on the range and playing here, do you feel comfortable?
C.T. PAN: I love the course. I think it sets up, fits me well. Sheshan Golf Club, it's hard. It's not long, but it's challenging. The design is really terrific. So I think it fits my game. I just need to play well.