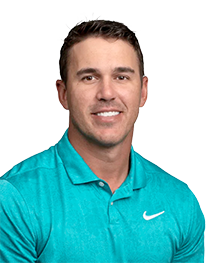 Brooks is a vastly underrated four time Major champion and former world number one.  He is a formidable competitor who heavily focuses on his athletic ability as well as his golfing ability.  Never afraid to be different, he focuses his season around the Major Championships.

Brooks increased focus on Majors has meant that between 2015 and 2020 he has nearly as many regular Major wins as he does regular PGA Tour events (4-5).

Beginning with the 2017 US Open, Brooks went on an unbelievable run of golf which brought him four Majors in only eight starts.  Only Ben Hogan, Jack Nicklaus and Tiger Woods have been able to replicate that form over such a short timeframe.  When you consider that only Brooks, Ben Hogan, Jack Nicklaus, Gene Sarazen and Tiger Woods have won the US Open and US PGA Championship, you start to realise just how significant his achievement was.

He has changed equipment at the end of 2021 to Srixon which he stated at the Hero World Challenge he was starting to see the results.

Brooks turned 30 in May 2020 and it was interesting that he was quoted at the 2020 Abu Dhabi Championship as saying,  “I’ve told my team, I want to rededicate myself for the next five years and really put my stamp on the game.”

Brooks suffered injury in 2020 and it was very much a stop-start year for him.

Summary
Brooks is known as a comfortable front runner or chaser. However, recent attempts  suggest his air of invincibility in contention is not what it once was. It should be noted that he won in impressive fashion from off the pace in Phoenix in 2021. His Golf Betting Club Pressure Performance Rating is set to ⭐⭐⭐.

February 2022
❌ Began the final round of the Phoenix Open 1 shot behind Sahith Theegala. Shot 69 to finish one shot off a playoff but in truth he was never really in with a chance of winning after a poor start.

November 2021
❌ Began the final round of the Hero World Challenge in 2nd place, five shots behind Morikawa. He could not capatalise Morikawa's demise and shot 74 to finish 7 shots behind Hovland.

May 2021
❌ Another Major and another disappointing Sunday for Brooks.  Entered the final round one shot behind Phil Mickelson but could only muster a 74 (2nd worst score of the players in the top 25).  Still not 100% fit after knee surgery as he couldn't bend down fully to read putts.

February 2021
➖ Began the final round of the 2021 WGC Workday Championship 2 shots behind Collin Morikawa. Shot 70 to finish 3 shots behind.

February 2020
✅ Began the final round of the Phoenix Open 5 shots behind Spieth and Xander. Shot 65 to win by 1 shot. Chipped in for eagle on 17. A really excellent round from off the pace.

August 2020
❌ Began the final round of the PGA Championship 2 shots behind Dustin Johnson and shot 74 to finish 29th, 10 shots behind winner Collin Morikawa who shot 64. It was an extremely poor performance.

August 2020
➖ Began the final round of the WGC - FedEx St. Jude Invitational 3 shots behind Brendon Todd. Shot 69 to finish 2nd, 3 shots behind Justin Thomas, however it was closer than it looked with Brooks double bogeying the last hole when 1 behind. He also bogeyed the easy par 5 16th when tied with Thomas at the top of the leaderboard.

​August 2019
❌ Again trailed Rory McIlroy by 1 going into the final round of the Tour Championship.  Shot a 2 over par 72 to lose out by 7 shots.

July 2019
✅ Trailed Rory McIlroy by 1 going into the final round of the WGC FedEx Invitational.  Shot a 65 to win by three.

June 2019
✅ Trailed by 4 going into final round of US Open.  Despite shooting a 68 he was denied by a brilliant Gary Woodland.

May 2019
✅ Won the US PGA Championship wire to wire, becoming only the fifth man ever to do so.

Stays hot
Five of Brooks last seven wins have come after posting a top 10 finish the week before.  He's definitely a player to stay hot and back when he's in form. Proved in 2021 with form of 4-5-6.

Avoid when playing here
Brooks tends to down tools at the final event of the year.  He missed the cut at Mayakoba in 2020, withdrew from the CJ Cup in 2019, finished last in the Hero World Challenge in 2017 and 13th of 17 in the 2016 Hero World Challenge.

Avoid when rusty
Brooks used to be a reliable early season performer but recent seasons have seen him struggle.  His opening results between 2020 and 2017 read 34-24-34-MC but we should bear in mind the two results in the middle came at the Tournament of Champions, where there were only 33 and 34 participants.  He's also taken mid-season breaks (5+ weeks) in each of the past four years and failed to record a top 25 on his return. Missed his first two cuts in 2021.

Events to back Brooks

Major's and WGC's!
Brooks is Mr Majors.  His record in recent Majors is unparalleled and he could easily have had more than 4 Majors to date. Just trust us here, Brooks is a big event player.

2021 Hero World Challenge
"It's just going back and trying to find out -- make sure everything's, you know, the simple stuff like posture, grip, the way we set up to it, all those things are the same as what they've been and that's -- I'm very happy with the direction we're going."

"I worked my tail off over the last two months and I see the light at the end of the tunnel. I'm damn close and it was nice to come out today and see the shots that come out the right window"

2020 Sony Open Hawaii
"That's why I don't play the West Coast. I enjoy it here. I enjoy it in Florida. It's a lot more comfortable on the greens this first couple starts of the year. The greens are a bit interesting in Hawai'i. I struggle on poa. Especially fast, slopey poa like last week, I don't play my best, but it'll be nice to get on some Bermuda and really roll the rock."

2019 PGA Championship
"You know, like I said, poa isn't my favorite grass to putt on, but I felt like my speed control has been pretty good."