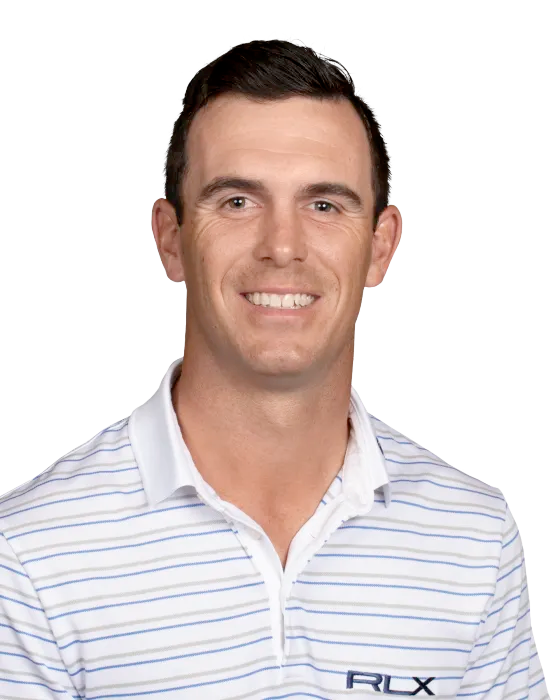 Billy is probably the defining example of the effect a baby (or impending baby arrival) can have on a golfer. In 2014 Billy claimed the BMW Championship and Tour Championship in consecutive weeks ensuring that he scooped the $10m FedEx Cup. Two days after his win at the Tour Championship his wife gave birth to their first child.

They say money can't buy happiness and Billy struggled in 2015 and 2016 to replicate his 2014 form, sliding from a career best 13th in the rankings to 81st in early 2017. However, in May 2017 it became apparent why Billy had struggled when his wife Brittany revealed she was an alcoholic and Billy had been trying to juggle his difficult family circumstances and life on tour. Billy and Brittany had their second child a month before Billy won in 2017, once again demonstrating the power of the 'Nappy Factor' on Billy.

Billy is a solid all round golfer whose results show he is now missing less cuts and increasing his number top top-10 finishes each year since 2017. States he enjoys playing in tough conditions.

In February 2020 Billy terminated his equipment sponsorship with PXG in protest at PXG parting ways with their director of tournament player relations.

February 2021
Began the final round of the 2021 WGC Workday Championship 2 shots behind Collin Morikawa. Shot 70 to finish 3 shots behind.

August 2020
He trailed Si Woo Kim by 3 shots going into the final round of the Wyndham Championship, shooting 65 to finish in 2nd, 1 shot behind Jim Herman who shot 63.

July 2018
Billy was one shot behind entering the final 18 holes at the Barbasol Championship. Shot a credible 67 (only two players bettered that in the top 20) to finish tied 2nd.

May 2017
One shot behind going into the final round of the AT&T Byron Nelson, Billy fired a 69 to get into a playoff with Jason Day which he would go on to win.

Summary
Two of Billy's four solo wins have come from off the pace and two have come leading after three rounds so he is equally adept at winning from the front or catching up. His record at the business end of tournaments is fairly reliable. His Golf Betting Club Pressure Performance Rating is set to 4 stars.

Stays Hot
Billy can be a streaky player and one to watch if his putter gets hot. In each of 2018, 2019 and 2020 he recorded back to back top 10 finishes in each year. Watch out for evidence of his putter heating up.

Billy has an exceptionally poor record at Majors and WGC events for a player who has spent the majority of the time since 2014 inside the world top-50. His best finish in a Major is 4th at the US Open in 2013. He hasn't missed a cut at the USPGA since 2013 so if a Major does come Billy's way its likely to be the US Open or USPGA.

He is one to back against at The Open where he has played 6 times and missed the cut 5 times (St. Andrews was the only course he made the cut on).

WGC's
Finished 9th at the 2019 WGC - FedEx St Jude Invitational. Followed with 25th there in 2020, this will be his best chance of a victory.

Best ever finish is 2nd at the WGC Wokday Championship.

1-1. Billy lost out at the 2017 RSM Classic in a 5 man playoff (he missed a 3 ft putt for par at the first playoff hole) but did beat Jason Day to win the AT&T Byron Nelson in 2017 after Jason three putted to hand Billy the title. Billy is someone to consider laying in a playoff situation.

British Open, 2019
With tomorrow's conditions, do you like playing (inaudible) to the forecast when it's nasty and windy?
BILLY HORSCHEL: I love it. I think for me I'm a pretty mentally tough player. I love playing in tough conditions. I think historically I've done well in them. I think guys can get in their own way, complain about it and sort of forget that everyone's playing in it. So I think historically I've loved conditions like that.