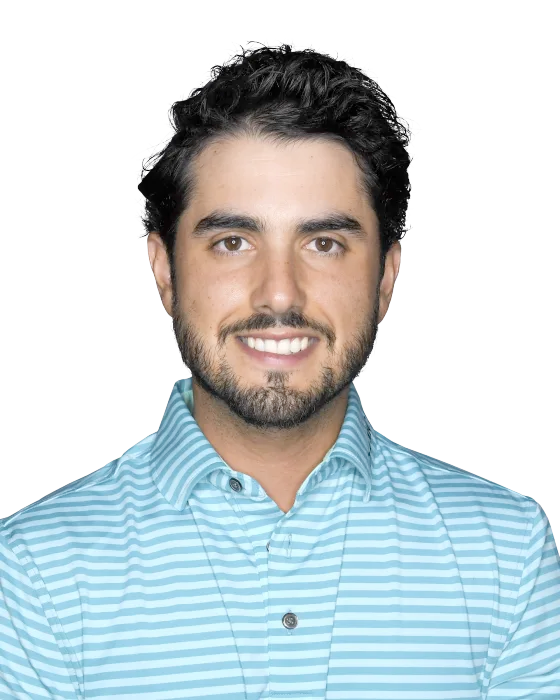 Abraham is a continually improving player who has moved up the world rankings each year since 2016. He posted runner up finishes at The American Express and RBC Heritage in 2020 and he's very much a player who is close to winning for the first time on the PGA Tour.

Perhaps best known for calling out Tiger Woods at the 2019 Presidents Cup, telling the world that was the match he wanted. Although the comments were taken out of context (Ancer merely said he wanted to play Tiger, not in a confrontational way) the story lingered unfortunately for Abraham.

Ancer is also the co-founder of a tequila company but he hasn't sent us a bottle yet so we can't comment on that!

Abraham turned 30 in February 2021. Abraham considers the Olympic golf event to be like a 5th Major so he will definitely be going for gold at Tokyo in 2021.

Abraham has stated that he likes the course at the Mayakoba Classic "a lot" and rightly so given that he has posted finishes of 9th, 21st and 8th between 2017 and 2019.

June 2020
Began the final round in four-way tie for the lead at the RBC Heritage. Shot 65 to lose out to finish 2nd behind Webb Simpson by 1 shot after Webb birdied 5 of his last 7 holes. Hit every green in regulation, it was really an excellent performance.

August 2019
Playing in the final pairing with Patrick Reed at THE NORTHERN TRUST, shot a final-round 69 to finish runner-up by one stroke. The second-place result marked the first top-two finish of his PGA TOUR career.

November 2018
Abraham closed out the Australian Open. Leading by 5 going into the final round he shot a 69 to win by 5.

September 2018
At the Dell Technologies Championship in 2018 he held a one shot lead going into the final round before shooting a final round 2 over par to drop into 7th.

July 2015
His first win at the Nova Scotia Open in 2015 came when holding the joint lead.

Summary
Abraham has held the 3rd round lead on several occasions, with mixed success. It is worth stating that both of his career wins have come whilst holding the lead or joint lead going into the final round. His Golf Betting Club Pressure Performance Rating is set at 3 stars given he has converted twice and performed poorly twice in contention.

Likes a birdie fest
Abe has finished 2nd three times on the PGA Tour to date. The winning scores for those events have been -24, -21 and -15. Surprisingly for a guy who struggles with the putter, he can make his share of birdies.

Major's
Abraham made all 3 cuts in majors in 2020, including a 13th place finish on his Augusta debut, where he was in contention until the final round. It is worth noting that he has missed the cut in his last two appearances at The Open. He is normally a good wind player so we can assume that he will take time to get used to links style golf.

WGC's
Abraham has performed well in the WGC events to date. He is trending in the right direction at the WGC Mexico having gone 52-39-12 (oldest to most recent) since 2016. We should expect to see Abraham continue that trend in 2021.

Abraham is also worth considering for the 2021 WGC HSBC Champions event given that he posted a top 4 finish there in 2019 and has stated that he is a big fan of the golf course. He is a serious contender for all WGC's now.

1-1. Abraham won his first title at the 2015 Nova Scotia Open via a playoff, defeating Bronson Burgoon by holing a 15ft clutch putt. Lost out to a birdie from Lanto Griffin in his second playoff in 2017.

2020 RBC Heritage
"I prefer tough golf courses for some reason."

2020 WGC Mexico
"The Presidents Cup have helped me so much feeling now when I step on the first tee -- I still feel nervous but I know how to control it in a way."

2019 Northern Trust
Q. We've talked about this before, but what did you learn specifically in Australia about winning tournaments?
ABRAHAM ANCER: I think what I learned the most was exactly a year ago in the Playoffs, I was tied for the lead I think at the Dell Championship in Boston. I didn't play bad. I just didn't make the key putts that I needed to make in certain parts of the round. But yeah, just the way I felt there, I think that situation is going to help me a ton and that showed in Australia. I was really calm on Sunday.

Granted, I had a five-shot lead going into the round, but still, you have to defend it. The conditions were really tough. I think those two situations were definitely going to help for tomorrow.

Q. Probably get that wind again tomorrow. Just knowing you can keep it under the gun in those conditions should help, too?
ABRAHAM ANCER: I mean, I like playing in the wind. I feel really comfortable bringing the trajectory down, and I'm not scared to play in 30-, 40-mile-an-hour winds. As long as everybody is playing the same stuff, I'm up for it. I like the challenge and I like hitting shots. The short game is definitely key when the conditions are tough.

2019 WGC HSBC Champions
Q. This is your best result since THE NORTHERN TRUST a few months ago. Looking forward to the next couple of months ahead, how does it set you up for the Australian Open defense and then your first Presidents Cup?
ABRAHAM ANCER: Yeah, I wanted to get some good result before heading into there. I didn't get the results I wanted in the past tournaments. I feel like I didn't play that bad. I just wasn't really scoring that well. So I knew it was close. I just had to stay patient, which paid off this week being -- doing that.

But yeah, it gives me confidence going into Mayakoba, my next event a golf course that I like a lot, and playing in front of my people, as well. After that, I go on to Australia. Just trying to get good momentum to head that way.

Q. Sum up your three-week swing in Asia. You're one of 17 players who played all three. How was experience?
ABRAHAM ANCER: Really good. Last year I played Korea and that's it. Obviously Japan is the first time they do it, which I loved it. I'm sure I'm going to be back next year. I really enjoyed my time over here. I really like the golf course, especially Japan and here. I'm a big fan of the golf courses.