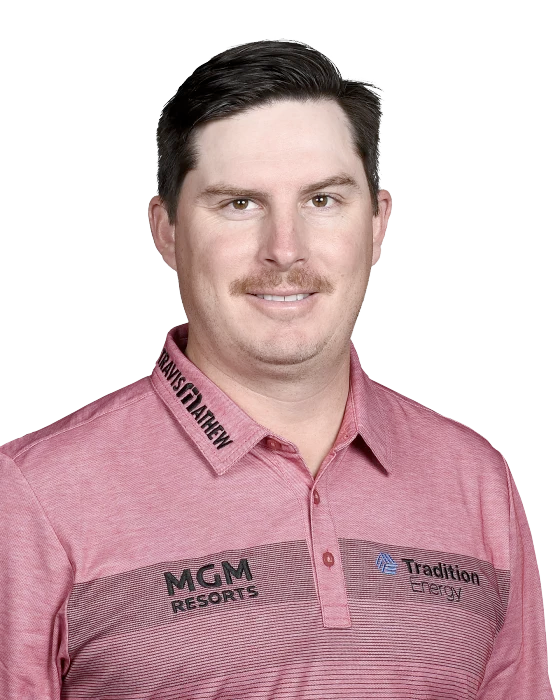 Joel is one of the more interesting characters on tour, recognisable for his bucket hat and accusing Sung Kang of cheating in 2018. He won his first PGA Tour event at the 2021 Corales Puntacana Resort & Club Championship after a run of six missed cuts in his first seven starts.

Joel is an accurate hitter, who can contend when the putter is hot. He enjoys tough golf courses, particularly when it’s firm and fast, not your traditional birdie-fests. He admits he is a streaky player who relies a lot on confidence. Favourite courses are Pebble Beach, Hilton Head and TPC Louisiana.

He won twice on the Canadian Tour in 2014, three years after he was diagnosed with testicular cancer. Don’t be too shocked to see Joel win on the PGA Tour soon.

Joel was diagnosed with testicular cancer in 2011.

Summary
Dahmen has been largely poor in contention. However, he did well when winning at the Puntacana. His Golf Betting Club Pressure Performance Rating is set to ⭐⭐.

February 2022
❌ Began the final round of the AT&T Pebble Beach 1 shot behind the leaders but could only manage a 72 to finish 5 shots back of winner Hoge. A poor performance.

March 2021
✅ Joel was joint leader going into the final round of the Corales Puntacana Resort & Club Championship.  A final round of 70 was enough to give him a one stroke win.

May 2019
➖ Wells Fargo Championship where he entered the final round with a tie for the lead with Max Homa and Jason Dufner. He shot a respectable 70 to finish 2nd, 3 shots behind Homa. He held a share of the 18-hole lead at Wells Fargo as well, his third such lead in a seven-week stretch on tour.

March 2019
❌ Following his first-round leads, he went on to finish 12th at Corales Championship and 30th at Valspar Championship.

July 2018
✅ Finished 2nd at the John Deere Classic with a final round 65, however was always playing for second with Michael Kim winning by 8 shots.

Unpredictable
Joel won in 2021 out of absolute nowhere, with six MC's and a 60th in his last seven starts.

Goes best when fresh
Several of his Top-10 finishes have come after a few weeks off, he appears to enjoy coming in fresh.  Notably, his win came after a week off.

Events to back Dahmen

Corales Championship
Dahmen won this in 2021 in terrible form and was also 12th here in 2019.

Wells Fargo Championship
16th in 2021 and a runner up in 2019, he has stated he feels comfortable here.

RBC Heritage, 2020
Q. Obviously, you had a great chance last year at Quail Hollow at the Wells Fargo. Do you take anything from that week maybe being one of your best chances of winning? You've had a few other really good chances as well. Is there something you take from past experiences to help you tomorrow?
JOEL DAHMEN: Absolutely. I felt really comfortable on the back nine today. I started sniffing at the lead a little bit. I'm comfortable being there. I finally feel like I belong there. I believe I'm starting to crack that top 50 in the world spot, and that's kind of where I feel like I'll be for a long time. I feel like I'm on my way there.

Arnold Palmer Invitational, 2020
Q. How much do you enjoy a test like this where it's really hard and here you lapped the field?
“I think it's awesome. I wish there was a few more weeks like this. I don't want every week like this, because it's tough. But, yeah, I certainly enjoy it. I like playing the bounce a little bit more, playing the ground, which is more fun, you can't just fly it and spin it anywhere. So it makes you think a lot more, so I think I'm pretty good at that part of the game.”

BMW Championship, 2019
“There was a couple of months where I was tired, I wasn't playing well, didn't always want to be at the golf course. Wyndham was the first week I showed up in a long time that I really wanted to be there and I was willing to put in the work.”

Valspar Championship, 2019
"I'm kind of a streaky player. Last year I got on a run and played really well. Once kind of things are aligning, once I know where the ball's going, or I should say once my feels match the real, then it's pretty good. Last week it did that. Putting is pretty good. It's always a couple of them out there, but once the putter doesn't misbehave then we're pretty good shape, like today. And these are real tough golf courses and it's better for me, I don't like making a million birdies, I would prefer that pars are good, fits my game a little better.”

John Deere Classic, 2018
“I played great coming down the stretch. I knew going into today I had no chance to win really unless Michael faltered, and that obviously didn't happen early.”

Byron Nelson, 2017
“My first time in this position. I was pretty nervous today all the way around and really settled down. Played with Dustin Johnson added to something like that. I never seen so many people on the 2nd and 3rd holes. It was really cool out there.”