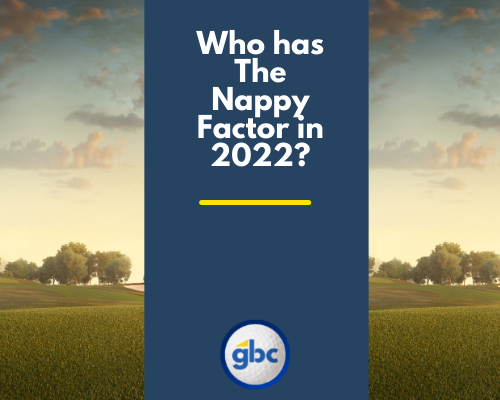 If you're familiar with our Player Profiles, you'll know we are firm believers in the positive effect a new baby can have on a player.

If you've never read our Player Profiles before, or haven't heard of The Nappy Factor, it is a term coined by legendary golf betting expert, Keith Elliott.  Around 25 years ago Elliott introduced the idea that a golfer could experience a boost in performance due to the unconscious change in mindset a new arrival brings.

Examples have been numerous throughout the years and you only have to look through our Player Profiles to see how many golfers have benefited.  So, who could receive a boost in 2022 as a result of becoming a father?

Jordan Spieth
The golden child became a father in November as he and wife Annie welcomed Sammy into the world.  Jordan indicated last week that things haven't changed much for him so far ("there's not a whole lot I can provide as far as, Annie keeps the kid alive") but we could well see a motivated Spieth in 2022.  Could the new arrival inspire Spieth to have a year like 2015?

Kevin Na
Kevin and his wife had their first baby in August 2019. That year was his best ever year on Tour with 2 wins, look out for a similar uptick in form in 2022 as the couple are expecting their first boy in March 2022.

Emiliano Grillo
It's been over six years since Emilano won on the PGA Tour but he'll be hoping a new arrival in the family will bring him further success.  Baby Grillo is due March 2022.

Martin Kaymer
Martin and his partner are due to have their first child in January.  We saw Martin really find form with his irons towards the end of the year and it's a shame that the Abu Dhabi Championship has been moved from Abu Dhabi GC to Yas Links as Martin would have been a player to watch.

Rickie Fowler
Rckie and his wife Allison welcomed Maya into the world on November 18th.  One month before Fowler came close to winning at the CJ Cup.  He needs a good year.

Camilo Villegas
We're rooting for Camilo to have a couple of big finishes in 2022 after the heartbreak of losing his daughter, Mia, in July 2020.  He's also just turned 40 (7th January).  A new baby in the family and a landmark birthday, it could well be Camilo's year.

Francesco Laporta
Francesco ended the year strongly and it was no surprise when he announced the birth of his baby girl in December.  Four top eight finishes in his last eight starts of the year was a strong end to the year and a first win on the European Tour must be close.

Johannes Veerman
Johannes posted a baby scan on his Instagram feed back in August.  Two weeks after the post he would collect his first European Tour win.  He and his wife will become parents in Spring 2022.

Cameron Tringale
One of the PGA Tour's nearly men will be hoping The Nappy Factor pushes him to finally win for the first time.  Four times a runner up on Tour, he's been in contention enough times throughout the years.  The arrival of Jade in December saw Cameron become a dad for the 2nd time.