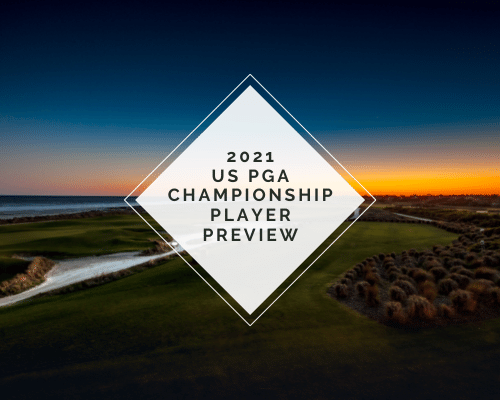 Nine of the past twelve winners of the Wanamaker Trophy have ranked inside the top 25 in the world.  History suggests that we shouldn't look too far outside the game's elite when attempting to pick a winner this week.

Rory McIlroy heads the betting at 12/1, closely followed by Justin Thomas and Jon Rahm (both 14/1). All three players have had their issues in 2021 and that's a theme that is common to a lot of players at the top of the betting.  Loss of form or injury problems are affecting several of the star names.

Past champions such as Keegan Bradley and YE Yang were relative shocks and it wouldn't be unthinkable to see the favourites flounder on a course that is heavily exposed to wind.

We can't wait for the event to get started.  Here’s our run down of the current top 30 in the world rankings and how we rate their chances:

Dustin Johnson – The world number 1 pulled out of last week's AT& T Byron Nelson citing discomfort in his knee.  That adds to his poor recent form.  However, he'll be excited about playing in front of his home state fans and assuming he's fit, is always capable of of a big week.

Justin Thomas – Won the Players Championship in March but hasn't been able to get all aspects of his game firing since then.  His putting was poor in his last two events but Justin is more than capable of finding some form on the greens.

Jon Rahm – Missed the cut at Wells Fargo two weeks ago and was out of sorts with his irons last week at the AT& T Byron Nelson (ranked 69th SG: Approach).  Stated that he was still adjusting to his new clubs.  One to watch in-running perhaps.

Bryson DeChambeau – A 4th place finish at last year's PGA Championship and a win at the US Open in September mean that Bryson has to be respected,.  However, Kiawah Island isn't your typical PGA course and Bryson struggles with the wind.  We can't see him winning this week.

Xander Schauffele – A 3rd place finish at the Masters continued his excellent record in Major Championships.  A first Major won't be too far away and there's every reason to like his chances this week.

Collin Morikawa – The defending champion has been largely out of form since his win at the WGC Workday Championship.  A 7th place finish last time out at the RBC Heritage was encouraging even if his performance in the final round was weak.

Rory McIlroy – Bounced back from a disappointing Masters with a win at the Wells Fargo Championship two weeks ago.  Won here in 2012 by eight shots.  It's not hard to see why he's favourite.

Patrick Reed – Patrick is the man everyone loves to hate but he could well be one to watch this week.  A fine wind player, with a good short game, he'll be hoping the breeze kicks up this week.  A 6th place finish on his last start at the Wells Fargo Championship was a promising warm up.

Tyrrell Hatton – Five wins in his last 28 starts mean he's a player who must be on our shortlist this week.  A fine record at the Alfred Dunhill Links Championships and a 6th place at the 2019 Open Championship are all indicators he'll enjoy the exposed nature of the holes at Kiawah Island.

Webb Simpson – Webb will be on many people's shortlist due to his consistency and ability to play in windy conditions.  He missed the cut here in 2012 which has to be a concern but that was largely due to an opening round of 79.  We wouldn't write him off.

Viktor Hovland – Viktor ticks a lot of boxes this week.  He arrives in red hot form, having recorded consecutive 3rd place finishes.  He's European, with a good record on Paspalum grass and we know he's capable of winning if in contention.

Brooks Koepka – Had minor knee surgery a few weeks before the Masters.  Still experiencing some problems and not fully fit.  You can never write Brooks off in a Major but a win this week would rank as one of his best.

Patrick Cantlay – Three consecutive missed cuts don't bode well, especially when he had only missed five cuts in total in the preceding four years.  Could be one to avoid until we see where his game is.

Tony Finau – Three missed cuts in his last five starts and a terrible record when under pressure makes Tony an unattractive propostion this week.

Hideki Matsuyama – The Masters winner hasn't played much golf after winning The Masters.  He was forced to quarantine when returning to Japan but should have knocked the rust off last week at the AT&T Byron Nelson.   A sound performer in Major Championships, he can't be dismissed.

Daniel Berger – Daniel is a good wind player and comes into this event with consecutive top 15 finishes.  He's yet to win his first major but he's certainly capable of making the step up.

Matthew Fitzpatrick – Matt missed the cut last week at the AT&T Byron Nelson but prior to that he was in exceptional form.  Matt has six career wins but is yet to really get into the mix in a Major Championship.  The test this week at Kiawah Island may suit him more than typical Major venues in the USA.

Billy Horschel – Won the WGC Matchplay and must be considered given he performs well with a bit of breeze.  His record in the Majors isn't great considering he has been inside the world's top 100 for the past eight years.  A best finish of 4th at the US Open in 2013 his best effort.

Abraham Ancer – Abraham is a fantastic ball striker who enjoys playing in the wind.  Consecutive top 5 finishes at the Valspar Championship and Wells Fargo Championship have propelled him to a career best world ranking of 19th.  Kiawah Island could be a great fit for Abraham.

Sungjae Im – It has been a quiet year for Sungjae to date.  His confidence appeared to take a knock when relinquishing a 36 hole lead at The American Express earlier in the year and he hasn't quite found his stride since.  His 2nd place finish at the Masters in November came after a similar run of form so he can't be discounted.

Paul Casey – Paul missed the cut at the 2012 PGA Championship, shooting 79-85.  He was badly out of form then but comes in this week having only missed one cut all season and recording nine top 30 finishes from ten starts.  His high ball flight isn't ideal for this test but he's experienced enough to manage his way round.

Lee Westwood –  Lee was in fine fettle earlier in the year when posting back to back runner-up finishes at the Players Championship and Arnold Palmer Invitational.  He hasn't been in great form of late but a top 25 last week gives him some hope, even if he did miss the cut here in 2012.

Harris English – Warmed up nicely for this week with a top 12 finish last week.  Harris won earlier this year at the Tournament of Champions and he shouldn't be written off.

Scottie Scheffler – Scottie finished 4th at last year's PGA  and is a young player who has plenty of potential.  He's been off the boil the past few weeks but he's capable of a big performance.

Matthew Wolff – Hasn't been seen since the Masters and was badly out of form before that.  Difficult to see him contending this week.

Tommy Fleetwood – Tommy will relish the conditions this week and given the success Europeans had here in 2012, he must come under consideration.  He's struggled to win in recent times and there would certainly be a concern about his ability to finish the job.

Cameron Smith – Cam won the Zurich Classic in his last start when paired with Marc Leishman.  A fine wind player, he's a definite danger this week.

Jordan Spieth – Jordan has certainly turned the corner this season, winning the Valero Texas Open and performing consistently almost every week.  He's only finished outside the top 15 once since March and last week's warm up at the AT&T Byron Nelson was impressive.

Joaquin Niemann – It's been a solid year for Joaquin, having broken into the world's top 30 after the Sony Open and remaining there ever since.  He won't mind a bit of wind this week and he'll be a popular pick.

Will Zalatoris – Will has played two Majors as a professional and finished top 6 in both.  A 2nd place at The Masters was an impressive follow up to his 6th place finish at the US Open in September last year and Will is a player going places.  He's yet to win on the PGA Tour but we wouldn't discount his chances on that factor alone.

You can sign up for all our 2021 US PGA Championship bets for only £30.  This fee includes outright bets, specials markets, match bets, 3 ball bets and in-play bets.

You can sign up by clicking the button below.