The Luck Of The Draw At The Masters? 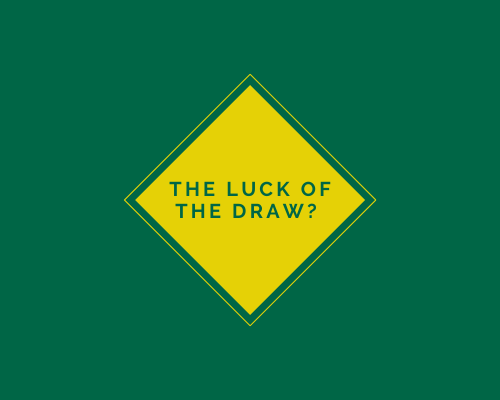 If you've read our Masters Preview you'll know that we list a number of trends to help us pick a winner.  One of the trends you're probably unfamiliar with is the one that states the majority of recent Masters winners have had a late Round 1 tee time.

This trend doesn't just indicate that it's better to avoid an early tee time, it specifically points to the last six tee times on Thursday as being the perfect draw if you harbour ambitions of wearing the green jacket on Sunday evening.  Seven of the last nine winners have teed off in the last six tee times in Round 1.

This includes last year's winner, Dustin Johnson, who teed off in the third last tee time.  Last year was unusual for a lot of reasons but one of the peculiarities was a two tee start.  This draw gave us an even more exaggerated version of the trend.

Now, we know that the later starters had a significant advantage last year but it's unusual to see the leaderboard so heavily stacked from one section of the tee times.  For the record, last year's top 6 and their Thursday tee times were:

At first it is easy to dismiss the theory as nothing more than a coincidence.  It's a small field, the best players in the world are playing and the draw normally places several of them towards the end of the day.

However, the trend is particularly strong from 2012 onwards.  This is around the time television coverage of The Masters started to increase and Augusta started broadcasting live streams of Amen Corner, holes 15 & 16 etc.  Could it be that players were now starting to watch TV coverage in the morning before their tee time to gain an advantage?

A No Laying Up Podcast in November last year with Marc Leishman's caddie, Matty Kelly, confirmed this.  Matty stated on the podcast that players and caddies do indeed watch the TV coverage before teeing off in the afternoon.

Given Augusta is a hard course to play catch up, it starts to become a reasonable theory that players who watch the early tv pictures gain a benefit on those players out early.  It could be that they see which pin placements are particularly tricky or it could be they just get a chance to see how the course is playing and set their expectations.  Either way, the trend would suggest it's better to be out late in the day on Thursday.

The other angle is that those who play late on a Thursday have less time to dwell on the fact they may have started brightly.  When teeing off late on a Thursday there will be little time to do more than warm down, eat and sleep before you tee it up again on Friday morning.  Contrast that with someone who has started well on a Thursday morning and then must occupy themselves for a significant number of hours before their Friday afternoon tee time.

It may all be a huge coincidence but having a late tee time on Thursday certainly doesn't hinder your chances of winning The Masters!