Tales From The Middle East 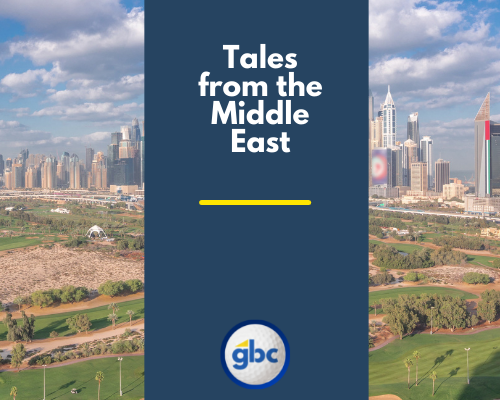 "A new variant named Omicron has been discovered in South Africa and it is spreading at a dangerous pace". The news Duncan and I dreaded hearing having decided we wanted to visit the Middle East in January. Luckily, the danger of the variant didn’t cause the UK to go into a full lockdown and we managed to book up a week before the Abu Dhabi Championship got under way. Panic over, or so we thought!

Covid really has complicated travel and we couldn’t properly relax until we got though check in. Firstly, it was an agonising wait for our mandatory pre-flight PCR test in the UK which had to be undertaken within 48 hours of our departure. We took our test at 7:03pm, two days prior, and were shocked to learn at the Emirates check in desk, that had the test been recorded four minutes earlier we wouldn’t have been able to board! Luckily, we drove into the wrong entrance for the drive-through test first time around and avoided a potential nightmare.

We arrived in Dubai after an overnight flight, feeling more inspired than ever after watching the Tiger Woods documentary on HBO. If you haven’t yet watched this take on the GOAT’s career/life, make sure you do. Another PCR test at Dubai Airport, a taxi swap (our original driver either couldn't be bothered driving to Abu Dhabi or he didn't have a recent PCR test), a border check at Abu Dhabi and we finally arrived at Yas Island whilst the players were finishing off the end of their 2nd round before the 3rd round got underway.

Full of jet lag and only a couple of hours sleep, we headed out to the course, which was handily placed 5 minutes away from our hotel. The players and spectators the previous day had to endure winds of up to 40mph at Yas Links but it was noticeable that the wind was still going to be a key feature for the weekend. To our dismay, jackets were required and it was quite cold when the sun departed behind the clouds. Duncan still managed to get sunburnt, of course.

The other notable factors were the perfect condition of the golf course and the levels of undulation on the greens, which the TV does no justice. With the wind coming off the Persian Gulf and the difficulty level of the undulation, we were in genuine awe of how the players coped with the test.

The course is quite a difficult walk for spectators, having to trudge through the desert hills and sand, but there is a terrific bar area open to the public which overlooks the 12th, 13th and 15th greens, meaning you can catch a lot of action at once. If you’re planning on going next year, make sure you’ve saved up some dosh - £9 for a can of Magners!

We spent our first evening checking out a couple of the local establishments in Yas Island, the coolest of which was a bar overlooking the Abu Dhabi formula one track. There is a constant noise coming from this track which you can hear on the golf course and it gets slightly annoying, however it was impressive to see the cars racing round close up. Whilst the constant noise from the race track was slightly annoying, it paled into insignificance compared to the thunderous snoring each night coming from Duncan’s bed!

Feeling a bit fresher, we woke up on the Sunday morning raring to go for the final round. We soaked up an out of sorts Collin Morikawa before joining the leading groups. Midway through, we found ourselves in a great position with two of our pre-event tips in 2nd place – Alexander Bjork (110/1) and Rafa Cabrera Bello (100/1). Ultimately, Thomas Pieters was too strong on the day, but Rafa did get us some good each way returns maintaining his 2nd spot.

The atmosphere on Sunday was much improved with the sun shining all day and bigger crowds, it felt like a different event. After the event, we got back to the hotel to film The Closing Stretch with Diane Knox Balas, previewing the final round of the American Express. If you didn’t watch that episode, Diane had a 250/1 dream and it turned into a reality, what a talent.

That evening we headed to try a spot of ‘night golf’ at Abu Dhabi City Golf Club. A unique experience, and not one I’d recommend to anyone who has also had laser eye surgery, with all the floodlights! Having hardly played all winter, there was a lot of rusty golf but it was a cool experience nonetheless!

We were up early to make a 200km journey north to Ras al Khaimah, to play Al Hamra Golf Club before it hosts the DP World Tour for two weeks in February. The course has a lovely quiet feel to it and the guys at Al Hamra looked after us so well. It’s a beautiful setting full of lakes, bridges and surrounded by stunning architecture. It is a lot more protected from the wind than Yas Links and the greens run extremely true, our feeling is that the pro’s are going to eat it up with birdies galore.

We met some friends from Cardiff that night, Tony and Ruth, who reside in RAK for two months to escape the British winter and they gave us some wonderful bits of local knowledge and history to the area. Both are teachers who have spent the majority of their life in the UAE so it was great to hear how the different parts have developed over the years. We sank a few Hoegaarden Rose’s (my new favourite pint) watching the sun set over Al Hamra before retiring for a much needed early night.

Tony joined us for another round of Al Hamra where Duncan put on a putting masterclass. If I were to guess, he must have made around 12 one putts and holed over 100ft of putts, much to my annoyance.

We finally managed to fit in a relaxing afternoon at our hotel beach, which was much needed after a hectic first few days. Our hotel was a bit of a hidden gem, amazing value for money and one that would be great to take the family to in the future. We'll provide details in our upcoming Guide to Golfing in the Middle East.

In the evening, we headed to RAK Hospital to get a “complimentary” PCR test to ensure entry to the Dubai Desert Classic on Thursday. Infuriatingly, the hotel gave us an out of date voucher for the test which they wouldn’t accept and it ended up costing us £20 each and a 90 minute round trip. Even more infuriating was the fact we weren't asked to show said PCR test to advance through the gate at the Desert Classic!

A last minute change of circumstances meant we made our way back south to play the Earth Course at Jumeirah Estates, which hosts the Race to Dubai finale at the end of every season. The place just oozes of class and we were taken care of from the moment we arrived. The locker room was so prestige and the course was everything you would expect from a venue hosting an event of such magnitude.

The size, depth and number of the bunkers was by far and way the biggest takeaway from the experience. Although we often struggle with our tee to green game, Duncan and I possess quite good bunker skills but it was extremely difficult to give yourself a good chance of getting up and down. The greens were in great condition, even if we found them tough to read on occasion, mainly due to the subtle undulations. The final three holes of the course are nothing short of spectacular and you can read all about it in our upcoming course review.

We got back to Dubai to check into our hotel. The receptionist informed us we had a free upgrade with a “balcony with a view”. Much to our amusement, the view involved the highway and wild desert - certainly unique. We took a taxi to the Marriot Harbourside where we headed up the 52nd floor a 360 view of the Palm and Dubai Marina. Later on, we taxied across town to a couple of lively bars, talking nonsense drinking Mai Tai’s whilst enjoying some live music.

On our final day of the trip we headed to Emirates Golf Club for the first round of the Dubai Desert Classic. A spectacular venue and like the Earth Course, in absolutely immaculate condition. The rough was noticeably up, putting an emphasis on accuracy for the week. It is a fabulous venue for spectators with lots of crossovers on the holes enabling you to hop between the groups you want to watch. The village has plenty to keep all of the family entertained if you were to take them along.

In the morning, we joined up with the Morikawa and McIlroy group, the former leading by three shots after 14 holes. An uncharacteristic finish by Morikawa meant that he finished with three bogeys in his final four holes and also meant that we have still not actually seen him play well in two visits!

In the afternoon, we used the amazing course setup to bounce in between lots of the groups. The 7th green in particular is a tremendous viewing spot on a hill, like a mini version of ‘Henman Hill’, where we watched the likes of Pieters, MacIntyre, Westwood and Hovland play through. The Robert MacIntyre group was being followed by Scottish and Premier League superstars Andy Robertson and John McGinn and it was great to have a brief chat with them. Duncan then managed to catch Rory McIlroy for a selfie I’m sure he will have framed in the near future!

After the golf, we went for a spot of last minute sightseeing, first of all heading to Jumeirah Beach Hotel for a great view of the Burj Al Arab and then heading to a rooftop cocktail bar overlooking the Burj Khalifa. It was a fitting end to a remarkable whirlwind trip and one which has left us itching to return next year!