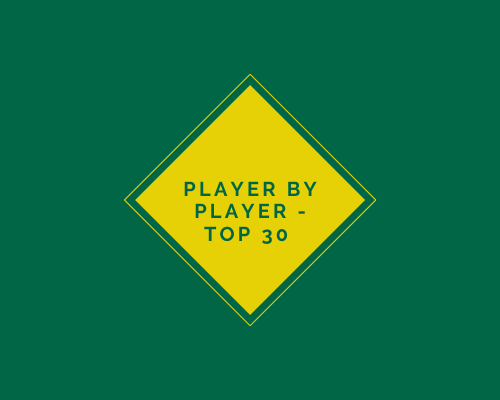 Eleven of the past twelve winners of the Green Jacket have ranked inside the top 30 in the world.  Convention dictates that we shouldn’t look too far down the betting to find a champion.

Dustin Johnson is the only player with single figure odds at the bookmakers but just three players have won the Masters in consecutive years and all three have been special - Jack Nicklaus, Nick Faldo and Tiger Woods. It’s hard to see DJ become the first since Tiger in 2002.  The traditions associated with being defending champion are taxing, even for a man as relaxed as Johnson.

Of the players next in the betting, it has been a case of bursts of greatness interspersed with some really average results.  Justin Thomas has been hot and cold ever since his use of homophobic language and the passing of his grandfather.  Collin Morikawa is another who has shown he’s unstoppable on his day, but also capable of some mind bogglingly poor putting performances.

Bryson DeChambeau has also been impressive in spurts but there remain concerns over whether he’s cracked the code at Augusta.  He blamed his poor performance last year on illness, and it’ll be interesting to see how he fares this time.

Fellow Americans Xander Schauffele, Patrick Reed, Webb Simpson and Patrick Cantlay will hope to take advantage of the weaknesses shown by others.  All are capable of contending and it may pay to look to these four.

The European contingent is normally headed up by Rory McIlroy and Jon Rahm, but both have their concerns. Rahm backers no longer have to worry about him pulling out should his wife go into labourt mid-event.  However, he wasn't his best at the WGC Matchplay and was lucky to progress from an easy group.  McIlroy has been badly out of sorts so far this year.  A two way miss off the tee has been causing him significant problems and it was no surprise he called in Pete Cowen.  Viktor Hovland is another struggling with his game in recent weeks.

Not all the Europeans are struggling as it’s been a fine start to 2021 for Englishmen Matt Fitzpatrick, Paul Casey and Lee Westwood.  None of them have had much to shout about at Augusta in the last couple of years though (no top 10s between them since 2017).

Tyrell Hatton and, to a lesser extent, Tommy Fleetwood also fall into that Augusta form category.  He isn’t English, but Harris English likewise.

It’s certainly shaping up to be a great event.  Here’s our run down of the current top 30 in the world rankings and how we rate their chances:

Dustin Johnson – The defending champion has gone off the boil in recent weeks, having disappointed at the two WGC’s and The Players Championship.  Prior to that went eleven straight tournaments without finishing outside the top 12.  Despite the mini-slump, he’s the understandable favourite.

Justin Thomas – Won the Players Championship two starts ago after weekend rounds of 64-68.  Poor at The WGC Matchplay.  This will be his 6th appearance and he’s bettered his best finish every year.  A definite danger if he brings the level of performance we saw on the weekend at Sawgrass.

Jon Rahm – Another who was poor at The Matchplay.  Progressed from an easy group and was found out in the knockout stages.  Wife just had a baby so he has The Nappy Factor.....

Collin Morikawa – His win at the WGC Workday Championship was highly impressive but putting frailties before that event and since.  His exceptional iron play means he could yet contend..

Bryson DeChambeau – Last year he took four weeks off to test longer drivers and gain more length.  Seems to be taking a more measured approach to this year’s event.  Yet to break the top 20 here in four attempts and putting a concern without his green reading books.

Xander Schauffele – A 2nd place finish in 2019 means he will have plenty of backers.  Came into that week off the back of very similar form to this year and can’t be written off.

Tyrrell Hatton – Last seen throwing clubs.  Hasn’t made it into the top 40 in four attempts here and hard to see him challenging this year given his current mindset.

Webb Simpson – Struggled with how to play Augusta in the early years of his career but is on the record as saying he’s worked out how to play it now. No coincidence he’s recorded three top 20s in a row.

Patrick Cantlay – Consecutive top 20 finishes make him a popular choice and it’s hard to argue.  Was sensational for several rounds at The WGC Matchplay.

Rory McIlroy – Without a win anywhere since November 2019, he has added Pete Cowen to his coaching team.  Only finished outside the top 10 once in the past seven years and could enjoy coming in from under the radar.

Brooks Koepka – Had minor knee surgery a few weeks ago.  Excellent record here but who knows how the knee will hold up.

Tony Finau – Could only muster 38th in 2020 but two top 10s prior.  Seems almost unthinkable his much talked about post-Puerto Rico win could come in an event of this magnitude.  Likely to be popular with each way backers though.

Viktor Hovland – Had four consecutive top 6 finishes between the Farmers Insurance Open and the WGC Workday but badly out of sorts in his last three events.  Only his second appearance at Augusta.

Daniel Berger – Wasn't invited last year despite his stellar play post-Covid lockdown.  Will be a popular pick given his combination of good recent form and solid course form.

Matthew Fitzpatrick – Only two winners from the previous 12 had not won in America before or claimed a Major.  He has neither and will be up against it despite his recent good form (top 20 in last five strokeplay events).

Billy Horschel – Won the WGC Matchplay but will really need to ride the momentum to have any chance.  Only managed a top 30 finish once from six starts.

Sungjae Im – Runner up last year on his debut.  Wouldn’t be a surprise to see the talented youngster contend again.

Paul Casey – Struggled the past few years at Augusta but his form in 2021 is outstanding.  Yet to finish outside the top 12 in a strokeplay event this year.  He came into the 2019 Masters in good form though and missed the cut.

Lee Westwood – Back to back runner up finishes at the Arnold Palmer Invitational and Players Championship have seen his odds tumble.  May have peaked too soon.

Harris English – Pulled out of The Players Championship with a back injury but seemingly fine last time out at the WGC Matchplay.  Hasn’t played The Masters since 2016 and hasn’t bettered 42nd here.

Scottie Scheffler – Runner up at the WGC Matchplay, he finished a very credible 19th on his Masters debut last year.  His aggressive game is perfectly suited to Augusta.  However, yet to win on the PGA Tour and difficult to see this being his breakthrough.

Matthew Wolff – Missed the cut on his Masters debut last year and hard to see him contending given his poor start to the year which has seen him battle injury and loss of form.

Tommy Fleetwood – Like Matt Fitzpatrick, Tommy needs to buck the trend of having won in America prior to winning.  Last in serious contention at The Scottish Open in November and anyone who saw his par putt in the playoff must be concerned about his putting under pressure.

Hideki Matsuyama – Only outside the top 20 once in the past six years here.  However, recent form a worry as no top 10 in his past 11 events.

Ryan Palmer – The forgotten man in the top 30.  Odds of 150/1 are reflective of the fact he hasn’t won since January 2010 (we aren’t including his pairs win at the 2019 Zurich Classic).  Recent form makes him a lively each way pick.

Louis Oosthuizen – Seven consecutive finishes between 12th and 41st mean he will probably get you excited at some stage this week but he’s without a win in two years and others preferred.

Joaquin Niemann – One of only two players in this list yet to make a cut at Augusta.  Will do well here in future but may need a few more attempts.

Victor Perez – Fourth at the WGC Matchplay and 9th at The Players Championship have nudged him inside the top 30.  46th on his debut last year means he may need a few more attempts at Augusta.

Cameron Smith – Runner up last year when coming in with great form.  Not as hot this year but a 5th place at The Masters in 2018 shows how much he enjoys the test.