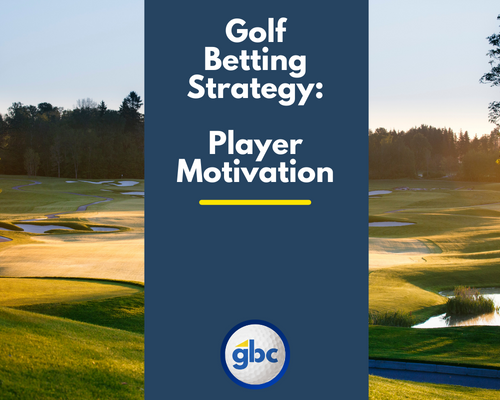 Should player motivation form part of your Golf Betting Strategy?

In today's blog we take an in-depth look at whether we should factor player motivation into our golf betting strategy.  Specifically, we'll look at players who have failed to make a team event such as the Ryder Cup or Presidents Cup and whether that's driven them on to improved performances.

Recent wins for MacKenzie Hughes at the Sanderson Farms Championship and Ryan Fox at the Alfred Dunhill Links Championship caught our attention due to the fact they both referenced missing out on the Presidents Cup in their post round interviews after winning.  Hughes was quoted as saying,

"I don't know if it's (not being selected) extra fuel, but it was disappointing -- I guess you would say it was fuel because I definitely worked a little harder after that and felt like that was a team I really, really badly wanted to be on, and I felt like I could have been a good help there. I totally respected Trevor's decision to go the direction he went, and the team -- there wasn't a weak link on that team. There was 12 great players. They had a really tough opponent in the U.S. I still cheered like hell for them to pull it off. But I'm definitely motivated for Montreal, and I don't want to have to let that come to a captain's pick next time when that comes around."

Hughes clearly wanted to be part of the Presidents Cup team and doesn't want to miss out on the next one.

Ryan Fox gave a mixed message on whether the Presidents Cup snub inspired him.  Quotes attributed to him on the 8th September indicated he was going to use missing out on the International team as "motivation for next time."  However, when interviewd after his win he stated,

"There was definitely some extra motivation there this week, maybe not so much the Presidents Cup, but definitely to try to do something special for (Shane) Warne, as I said and I'm pretty proud to have been able to accomplish that."

Fox's long time partner in the pro-am competition had been Australian cricket legend Shane Warne.  Warne died in March 2022 and it would appear that Fox's desire to win for his friend surpassed any other reason.  We can only speculate how Fox may have been affected by the Presidents Cup had Warne not passed away but maybe missing out on the Presidents Cup would have had a greater impact on him.

Let's take a look at who won tournaments after the last few Ryder Cups and see if that generates a similar narrative.

Past winners after the Ryder Cup

The 2021 Ryder Cup was played 24-26 September 2021. The Sanderson Farms Championship was the event which immediately followed on the PGA Tour and that was won by none other than Sam Burns.  Burns narrowly missed out on being a wildcard selection for the US team and it was clear that was on his mind,

"I think getting the call from Stricker on Monday and hearing the news that I didn't make the team was definitely very motivating and definitely kind of gut wrenching. And, so, yeah, I think it's definitely motivated me to try to be on the next team and continue to try to improve and hopefully be on it the next go."

It wasn't just Burns who was impacted after the 2021 Ryder Cup.  The event which immediately followed that Ryder Cup on the European Tour was the Alfred Dunhill Links Championship, won by Danny Willett.  The Englishman played in the 2016 Ryder Cup and was quoted following his win as saying,

"It's the first time I watched the Ryder Cup and been bitterly disappointed I wasn't there. It wasn't nice to watch the guys get beat when you know that you think you can add something to the team."

Admittedly, Willett was a long shot for a Captains pick in 2021 but that's not perhaps the point.  The fact the player thinks he's capable of adding something to the team is enough to generate additional motivation. That was likely the case for Willett's 2016 Ryder Cup team mate, Rafa Cabrera Bello, who lifted the Open de Espana trophy the week after Willett won in Scotland.

We can forgive you for being sceptical up to this point.  Danny Willett winning an event where he already had two top five finishes and Rafa Cabrera Bello winning on a course he had previously been runner up are hardly cast iron proof that missing out on the Ryder Cup were the reason for their success.  However, a look back at the results following the 2018 Ryder Cup provide two further interesting examples.

The 2018 Ryder Cup was played 28-30 September 2018.  This time around the first event immediately after on the European Tour was the British Masters.  The winner?  Eddie Pepperell.  Those of you who can remember that far back may recall Pepperell being on the fringes of Ryder Cup qualification.  Indeed, a win in the final qualifying event in Denmark would have seen him make the team automatically.  Pepperell was quoted in the aftermath of his British Masters win as saying,

“I think this year would have been premature for me, even though I came close to making the Ryder Cup team. But certainly in 2020. I think mentally I’m ready for it, mentally I was ready for it this year, whether the game was there or not I don’t know but come 2020 I sure hope I will be a qualified member of that team."

If the 2020 Ryder Cup was in Pepperell's thoughts it was also definitely a factor in the thoughts of Lucas Bjerregaard, winner of the Dunhill Links Championship the week after the Englishman.  Unlike Pepperell, Bjerregaard wasn't in the running to be selected for the 2018 team but he did attend that Ryder Cup as a guest of European captain, Thomas Bjorn.  Bjerregaard was seen as a future Ryder Cup participant and Bjorn opted to give him a taste that week in Paris.  Bjerregaard was quoted as saying,

“I had never been to the Ryder Cup before, but Thomas was kind enough to invite me. He showed me around. I saw the team room and the locker room and I would lie if I said I wasn't inspired going home from there.”

Pepperell and Bjerregaard were unlikely Ryder Cup participants but its interesting both players believed they could one day compete in the competition.  The fear of missing out is often the most powerful motivator of all and both cited a determination to be part of future teams as motivation.

Past winners after the Presidents Cup

We've already referenced Ryan Fox and Mackenzie Hughes winning the week after this year's Presidents Cup.  However, it's also worth mentioning Min Woo Lee.  The Open de Espana was played the week after the Dunhill Links on the DP World Tour and Min Woo Lee would challenge Jon Rahm all week for that title.  Only the Spaniard's excellence prevented the youngster from winning.  Lee had spoken on several occassions about making the international team at the Presidents Cup. Indeed, his 2022 goals were to "be on the PGA Tour and get on the Presidents Cup team."

The 2019 Presidents Cup was played much later in the year, taking place 12-15 December 2019.  There were no regular PGA Tour events until January 2020 and the winners of the first two events both played in the President's Cup, just as Tom Kim did this year when winning the week after MacKenzie Hughes.  neither winner supports the theory that

The 2017 Presidents Cup didn't support the theory either.  The two winners on the PGA Tour in the weeks that followed were Brendan Steele and Pat Perez.  Both players had won in the 12 months preceding the Presidents Cup so may have harboured hopes of a pick for the US team but in reality neither player was close to selection given the depth of talent available to the US captain, Steve Stricker.

Unlike the Ryder Cup, the Presidents Cup gives us less evidence that it's a motivating factor for players.  It's generally seen as the less prestigious of the two events and perhaps that has a factor to play.

Should you factor player motivation in to your golf betting strategy?

The simple answer is yes, it should be a factor.  There are obviously a number of factors to consider when making your selections for a golf tournament but the disappointment of missing out on a team golf event and the motivation that brings should be definitely be considered.  We've seen enough examples, especially relating to the Ryder Cup, that indicate that players who missed out on being selected use this as to fuel their future performances.

We should also remember that professional golfers are human, what motivates one person will not always motivate another.  However, those golfers who value team golf and/or representing their country will often harbour an internal desire to show others that they shouldn't have been overlooked.  It's worth keeping this in mind for the events that immediately follow the 2023 Ryder Cup!