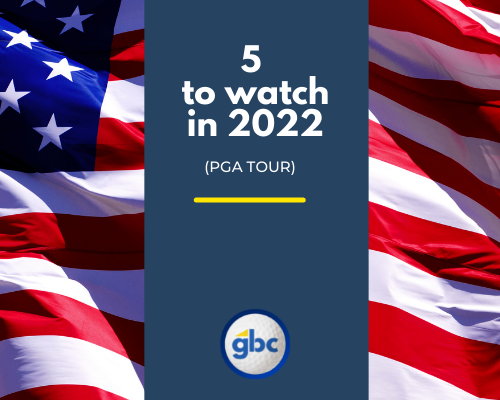 The 2021 version of this article saw two of our five selections win for the first time and Will Zalatoris did everything but.  We've picked out another five players who we think are set for a big year:

Guillermo Mito Pereira
Guillermo won three times in 32 Korn Ferry Tour starts across the 2020/21 seasons to earn battlefield promotion to the PGA Tour.  The step up in class proved no problem for the Chilean as he went on to record three top 6 finishes on the PGA Tour and a 4th place at the Olympics.  He's a player to keep onside when on a hot streak.  His wins in 2021 came in consecutive weeks and all four of his career victories have been preceded by a top 10 finish.  Close friends with Joaquin Niemann, it surely won't be long until he follows his countryman into the winners circle.

Greyson Sigg
Like Pereira, Greyson won twice on the Korn Ferry Tour in 2021.  Diminutive in stature (he's 5 foot 7 inches), he's been compared to fellow Georgia Bulldog, Brian Harman.  He's close friends with Keith Mitchell and Sepp Straka, both of whom have spoken highly of Sigg's game.  Mitchell is on record as saying is "natural game is perfect," whilst Straka has previously described him as a "stud."  His college coaches were equally complimentary and his soft draw shot shape is said to be extremely consistent.  He's not afraid to go low, having shot a 59 on the Canadian Tour in 2018.  His best results have occurred when scoring is low so perhaps one to keep in mind for lower scoring events.

Sahith Theegala
Sahith came close to winning last year, having held the lead through the first three rounds at the Sanderson Farms Championship.  A nervy final round ruined any chance he had of winning that day but there's no doubting he's one to watch.  An outstanding college record saw him collect the Haskins, Hogan and Nicklaus awards in 2020, becoming only the fifth player ever to collect all three.  He's also a former Junior World Champion, having triumphed three times as a youngster.  For all his natural talent, he can be wayward off the tee and he's likely to excel on courses with wider than average fairways.  There's no doubt he'll benefit from his experience at the Sanderson Farms and will be stronger in contention next time an opportunity arises.

Taylor Pendrith
Taylor was another player who threatened a win on the PGA Tour in 2021.  The 30 year old Canadian held a three shot lead going into the final round of the Butterfield Bermuda Classic before falling away with a final round 76.  Despite two wins in 2020 on the Korn Ferry Tour, Taylor isn't a natural closer of tournaments, as evidenced by the fact he's been runner up eight times in just over 120 events.  Given he's not a natural front runner, a win is likely to come from off the pace in 2022.  His strong driving makes him a player capable of making the step up to the PGA Tour and he's a player we want to keep an eye on this year.

Kramer Hickok
Kramer isn't the most consistent of golfers (he's missed 49% of cuts the past two years) but he's shown that he's capable of posting big finishes.  He was unlucky to lose out to Harris English at the Travelers Championship this year and was in contention going into the final round of last year's Bermuda Championship.  Those experiences will serve him well, as will the fact he turns 30 in April this year.  A landmark birthday often spurs a golfer on to a higher level and this could well be the year Kramer breaks through.  He's good friends with Sam Burns and Jordan Spieth, so he's not short of top class practice partners!