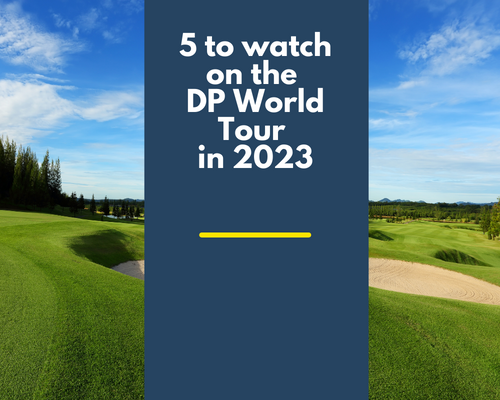 Can we better last year's effort?  Here are our five to watch in 2023.

Tom Lewis
Tom is without playing privileges on any Tour this year.  However, it is expected that he receives a number of invites for DP World Tour events and he is a player we expect to make the most of those opportunities.  He's back living in England, having been based in the USA for the past few years.  That stability should allow him to play his best golf and we saw flashes of what he was capable of in the second half of this year.  Once ranked 46th in the world, he's slipped outside the world's top 600.

Marcus Helligkilde
The young Dane featured in this list last year and following three top ten finishes on the DP World Tour in 2022, he is included once again.   Helligkilde topped the Challenge Tour rankings in 2021, winning three times.  Add three career wins on the Nordic Golf league and he has a total of six wins on his resume already.  An attacking player, who hits the ball a long way, he can join the growing band of Danish winners on Tour.

Nicolai von Dellingshausen
Von Dellingshausen has been a runner up on the DP World Tour in each of the past two years and looks set to follow the route trodden by compatriot Max Kieffer.  Kieffer was a four time runner up before his breakthrough win but Von Dellingshausen will be hoping he doesn't have to wait that long. Diagnosed with Lyme disease after playing in the co-sanctioned events on the PGA Tour this summer, he doesn't appear to have been affected by that diagnosis so far.  However, it is something we'll need to keep an eye on throughout the coming year.  He turns 30 in January, will this significant birthday be the catalyst for a breakthrough win?

Julien Brun
Brun comfortably kept his DP World Tour card in 2022, having graduated from the Challenge Tour the year before.  A two time winner on the Challenge Tour in 2021, it would be no surprise to see Brun post a win on the DP World Tour in the coming 12 months.  Callaway described Brun as a "college phenom" when tying him down to an equipment deal in 2015.  The intervening years haven't quite hit those heights but he turned 30 this past April and we're likely to see his best golf in the coming years.  The Frenchman kicked off his 2023 season with a 3rd place finish in Mauritius and that result should set him up for a big year on Tour.