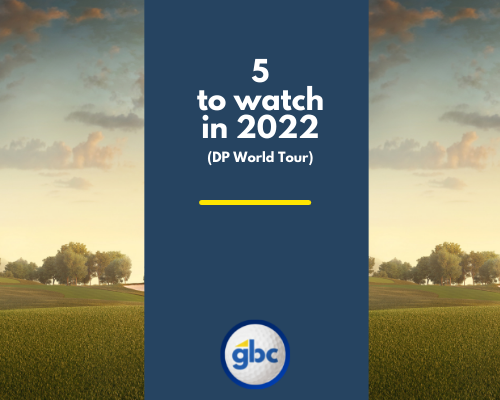 It's all change for the European Tour in 2022.  Re-branded as the DP World Tour, we'll see bigger prize money, new events and plenty of new courses.  We've highlighted five players who we think could reap the benefits by having a successful year.

Thorbjorn Olesen
First on our list was a player who has had a difficult few years to say the least.  Accused of sexual assualt (amongst other thngs) on a flight home from America in July 2019, Olesen was originally banned from the European Tour before being allowed to play whilst he awaited trial.  He was found not guilt in December last year and after the verdict stated,

"This case has had a devastating impact on me personally, on my family, and on my career....I have learned from my mistake and will make sure I never put myself in a similar position again. I now want to focus on my golf, free from distractions."

A former Ryder Cup player and ranked inside the world's top 50, Olesen has clearly struggled personally and professionally in the 30 months since the incident.  We saw flashes of brilliance last year, especially in low scoring events, and Olesen will surely enjoy playing this year without the court case weighing over him.  It would be no surprise to see him win pop up with a win this year.

Sean Crocker
A more obvious choice than others on this list, Sean has been a runner up in each of the past three seasons on the European Tour.  His superb ball striking ensures he's a factor more often than not.  His putting and performances under pressure have prevented him from winning to date but it's entirely possible we see him overcome those difficulties in 2022.  It wouldn't be a shock to see him win multiple titles this year if he posts his first win in the opening months.

Kalle Samooja
Kalle has been knocking on the door of a win in the last couple of years and this could well be the year he makes the breakthrough.  The 33 year old Finn has recorded three top 3 finishes in the past two years, including a playoff defeat at the 2020 Cyprus Open.  Keep an eye out for Kalle in Qatar.  He was quoted as saying Qatar was one of the courses he looked out for on last year's schedule.  Third and 28th there the past two years, he's likley to go well again.

Marcus Helligkilde
We identified Marcus as One to Watch at the Dutch Open in September last year and he's certainly one to watch in 2022.  Available at 125/1 in the Netherlands, we're unlikley to see such fancy prices again, certainly not in weaker field events.  The young Dane topped the Challenge Tour rankings in 2021, winning three times.  Add three career wins on the Nordic Golf league and he has a total of six wins from just over 80 starts as a pro.  An attacking player, who hits the ball a long way, it would not be a surprise to see him follow in the footsteps of his fellow Danes, the Hojgaard brothers.