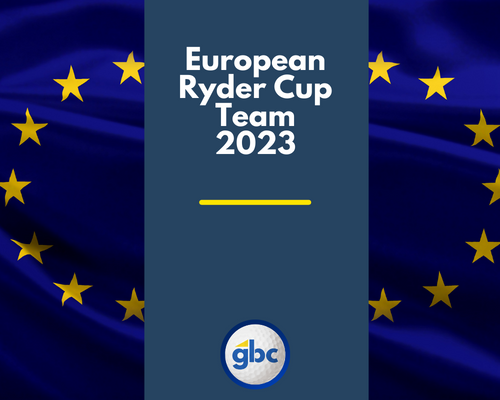 Who do we predict to be in the European Ryder Cup Team 2023?

If you read Monday's blog, you'll know we selected the following twelve players as our European Ryder Cup Team in Rome.  However, in today's blog we delve into the European team in more depth and analyse the runners and riders.

Let's break these down in a bit

What are the individual odds of making the European Ryder Cup team 2023?

Skybet in the UK made the following seven players heavily odds on to make the team after the Open de France (odds correct as of 28th September 2022).  Odds for those seven were:

Barring injury or illness, it's almost inconceivable that Rory McIlroy, Jon Rahm, Viktor Hovland, Matt Fitzpatrick, Shane Lowry, Tyrrell Hatton and Tommy Fleetwood won't be competing for Europe at Marco Simone Golf Club in September 2023.  You won't get odds of better than 1/10 on any of them making the team and they are expected to form the backbone of the team.  Luke Donald will be desperately hoping his star names stay fit and in form.

That leaves five places on the European Ryder Cup team up for grabs.

Who must play well to be part of Team Europe at the 2023 Ryder Cup?

Robert MacIntyre's win at Marco Simone Golf Club two weeks ago was mightily impressive and he's got to be one of the front runners for a captain's pick if he doesn't qualify automatically.  Two top 10 finishes in The Open and a 12th place finish at The Masters show he can cut it with the best in the world.

Thomas Pieters is very much in the same category as MacIntyre and he too is expected to make the trip to Rome.  The Belgian has become a more consistent player since becoming a father and it certainly helps he has Ryder Cup experience already on his resume.

Alex Noren is a name not everyone will agree with but the Swede is a proven performer in Europe and multiple winner.  Noren was also solid at the 2018 Ryder Cup in Paris, winning two points from three matches, including a point in the singles.  A big finish at the Dunhill Links Championship will certainly help his case.

Francesco Molinari has had a barren few years but there have been signs of life of late and he's worth taking to Rome just to have him available to pair Tommy Fleetwood.  No American pair was able to defeat 'Moliwood' in Paris and Fleetwood is on record as saying there is nobody he feels more comfortable on the course with.  The fact Molinari would be playing in front of his home crowd is an added bonus.

Guido Migliozzi is perhaps the most controversial selection but there's actually quite a few factors in his favour.  Firstly, his win at the Open de France last week showed he can pull off the hardest shots under the most severe pressure.  It's been a while since his last win but that win in France was his third on the DP World Tour.  One of those wins was actually a matchplay event, the 2019 Belgian Knockout, showing he's adept at that style of golf. He's also shown he can perform in Major Championships, posting a 4th place finish at the 2021 US Open and following that up with a 14th place finish at the 2022 US Open. Finally, he too will have the home crowd behind him given his nationality.

Who misses out on the European Ryder Cup Team 2023?

Sepp Straka and Seamus Power are two players who some will feel deserve a spot given their performances on the PGA Tour the past year.  At the time of writing (28th September 2022), Straka is 36th in the world and Power is 40th.  It's almost certain that both players will be eligible for Majors and the biggest events next year so they will certainly have opportunities to put themselves in the shop window.

Straka has struggled for consistency throughout his career but is on record as saying he'd "love to play in the Ryder Cup."  One or two big finishes in the Majors or another PGA Tour win may make him impossible to leave out.

Power describes making the Ryder Cup team as a "career goal" and he's in a similar position to Straka.  Power recorded top 12 finishes at the US Open and US PGA Championship and will need to at least replicate that next year.  To some extent playing in the USA hinders him as a couple of wins on the DP World Tour are likely to be more eye catching.

Those of you who watch the DP World Tour regularly will know that Rasmus and Nicolai Hojgaard are likely to be a staple of Ryder Cup teams to come.  Both have won multiple events on the DP World Tour, with Nicolai claiming one of his wins at Marco Simone GC, the Ryder Cup course.  However, neither player has shown any form outside of Europe and neither player has yet to put in a big performance at the Majors.  This may be a Ryder Cup too soon for the Danish youngsters.

Victor Perez returned to form in 2022 but he'll need to continue that form into 2023 to have any chance of making the team. He's behind others in the pecking order at the moment.

Danny Willett could have won at the Fortinet Championship a few weeks ago but he remains a player who is wildly inconsistent.  He's capable of big performances but he needs to post a solid run of results to catch the captain's eye.

Finally, players such as Thorbjorn Olesen, Matt Wallace, Adri Arnaus, Thomas Detry and Rafa Cabrera Bello will feel they deserve to be in the reckoning.  Each will need to have a career best season to make the team but it's not unthinkable we see a strong run from at least one player.

Could LIV Golf have an impact on the European Ryder Cup Team in 2023?

It would seem unlikley that Europe will lose any further players to LIV Golf.  Most of Luke Donald's star names have pledged their allegiance (or "fieldty" - Jon Rahm) to the PGA Tour and the remaining names are unlikely to have a profile which will attract big offers from LIV.  Viktor Hovland is the one player who could yet leave and he would be a big loss to Team Europe.

Do you agree with our team?

Let us know on Twitter if you agree or disagree with our team!