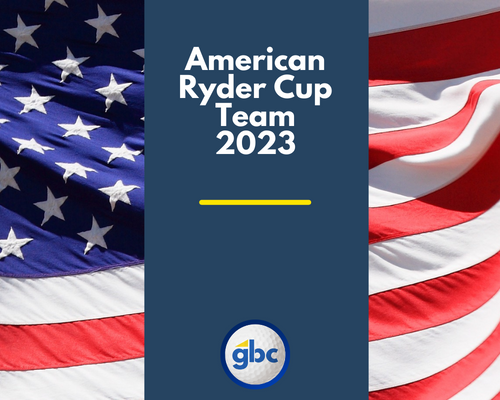 Who do we predict to be in the American Ryder Cup Team 2023?

If you read Monday's blog, you'll know we selected the following twelve players as our American Ryder Cup Team in Rome.  In today's blog we delve into Team USA and look at who we've selected and who we haven't.

Let's break these down in a bit more depth.

What are the individual odds of making the American Ryder Cup team 2023?

We haven't found any bookmakers offering odds on players making the American Ryder Cup team in 2023.  If you know of a bookmaker offering odds please let us know and we'll amend the blog.

At best, that leaves five places on the American team up for grabs.

Who must play well to be part of the American Team at the 2023 Ryder Cup?

Will Zalatoris is one who is expected to be on the plane for Rome.  The young American capped an impressive year with a win at the FedEx St Jude Championship and his ball striking is likely to be a tremendous asset in the pairs formats.

Danny Willett may have have been gifted Max Homa the Fortinet Championship two weeks ago but the likeable Californian has now won four events in his last 40 starts on the PGA Tour.  An impressive 4-0-0 record on his debut at the Presidents Cup makes him almost impossible to overlook for team golf.  The only negative is he's yet to shine in the Majors but that could well change in 2023.

Unlike Max Homa, Sam Burns had a rather disappointing Presidents Cup debut.  One point from five matches was a very poor return but his friendship with Scottie Scheffler will count for a lot and he too is expected to make the trip to Italy.

Daniel Berger and Cameron Young are the two players who will need to play well in 2023 to earn their spot on the team.  Young had a breakout year in 2022 but in all probability needs to maintain his good form into 2023.  Like Burns, hoo disappointed atthe Presidents Cup, scoring only 1.5 points from four matches at Quail Hollow.

Daniel Berger didn't make the Presidents Cup team due to injury and will need to put in a strong showing in 2023 to make the team.  However, two points from three matches at the Ryder Cup will do his chances no harm and if he can find several big finishes in the coming year, he's likley to be in the captain's thoughts.

Who misses out on the American Ryder Cup Team 2023?

Kevin Kisner and Billy Horschel may have made the recent Presidents Cup team but it's hard to see them making the Ryder Cup team next year.  Neither player made a strong case for themselves at the Presidents Cup and they'll need to have a career year to force their way into the team.  Past arguments for both players centred around their matchplay prowess but they managed only 1.5 points between them from six matches and it will be easier for Johnson to overlook them.

Harris English was part of the victorious 2021 Ryder Cup team but he only scored one point from three matches at Whistling Straits and his subsequent loss of form means he'll have to play well in 2023 to force his way back into the reckoning.

Sahith Theegala could well throw his hat in the ring if he maintains the form he showed in 2022.  Theegala is one of only five players to win the Hogan, Nicklaus and Haskins awards as an amateur and he's a player going places.  This might be a Ryder Cup too son for him though.

Could LIV Golf have an impact on the American Ryder Cup Team in 2023?

In a word, yes.  Rumours persist that several of the world's top 20 will move to LIV in 2023.  Patrick Cantlay and Xander Schauffele seem like the candidates most likely to make any move but Schauffele in particular seems to love team golf and it would be a shock were he to take the money and run.

Do you agree with our team?

Let us know on Twitter if you agree or disagree with our team!